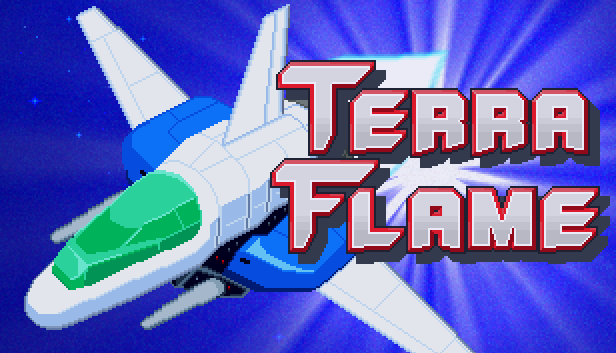 Currently, a demo version is available. You can play caravan mode. Online ranking is supported.

Terra Flame is a game inspired by 90's horizontal shmups. The feature is that you can switch between three types of weapons in real time.

As you know, horizontal shmups generally have many walls and require detailed controls. However, in this game, speed and exhilaration are more important than detailed controls. There are many structures that shmup fans can enjoy, such as huge battleships and high-speed scrolling stages. 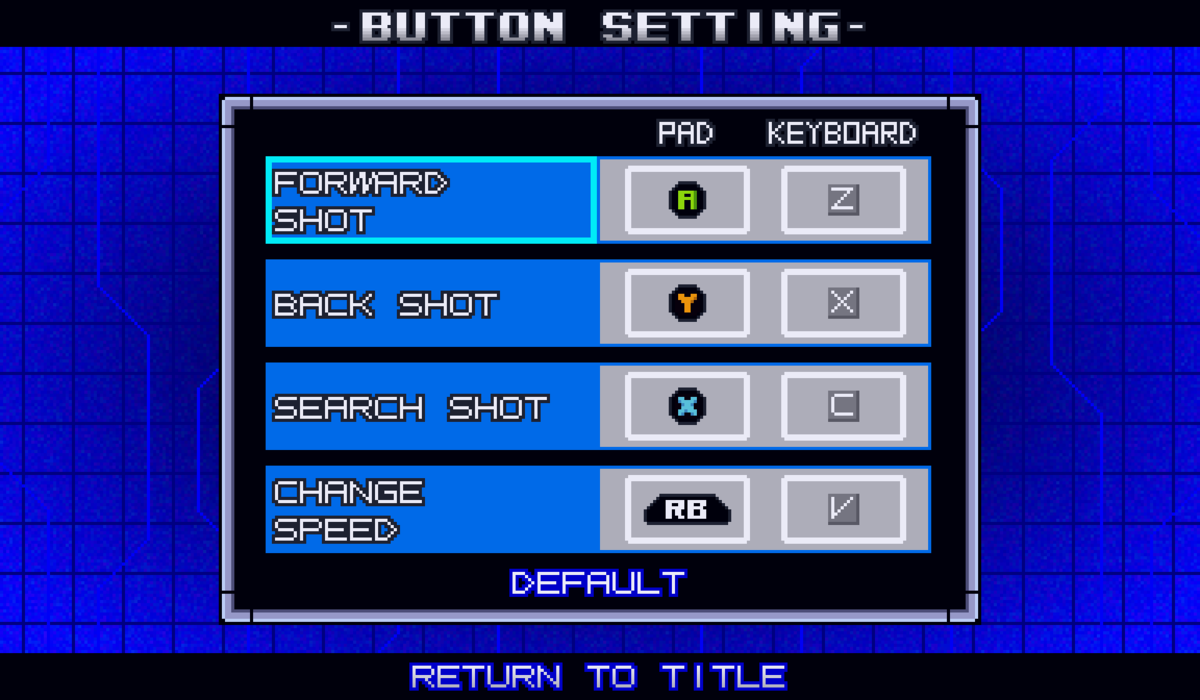 Various settings can be changed in the option menu. Music can be selected from original and chiptune arrangement (MD sound source). 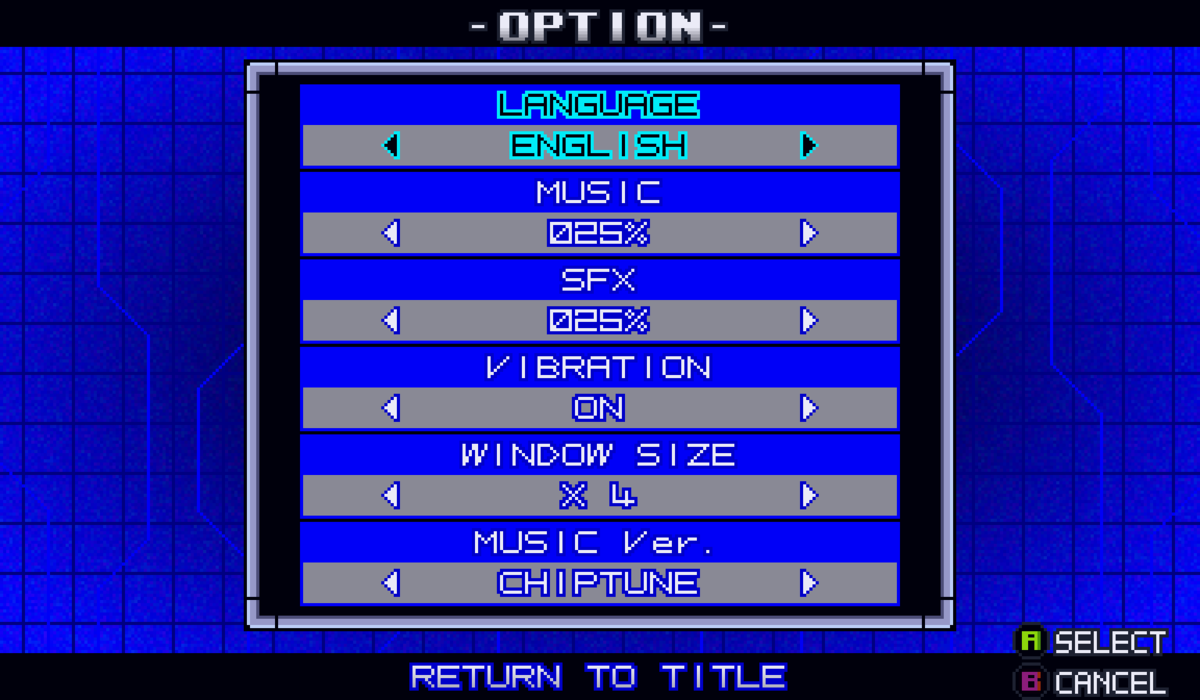 Enemies will appear from various directions, so the point is to use 3 types of weapons properly. Forward Shot, Back Shot, and Search Shot are equipped from the start and can never be lost by being hit.

In general, shmups have a problem with search shots being too efficient, but I've adjusted it so that it doesn't occur. The search shot in this game is a very reliable weapon because it automatically tracks the enemy. However, it will not track enemies behind you. Therefore, you'll need to use buckshot against enemies behind you. As for attack power, the forward shot is the most powerful. Therefore, it is important to properly use all three types of weapons.

By getting the "P" item, the weapon will be powered up to 3 levels. After powering up, you will have more directions for your shots. All three types of weapons power up at the same time. 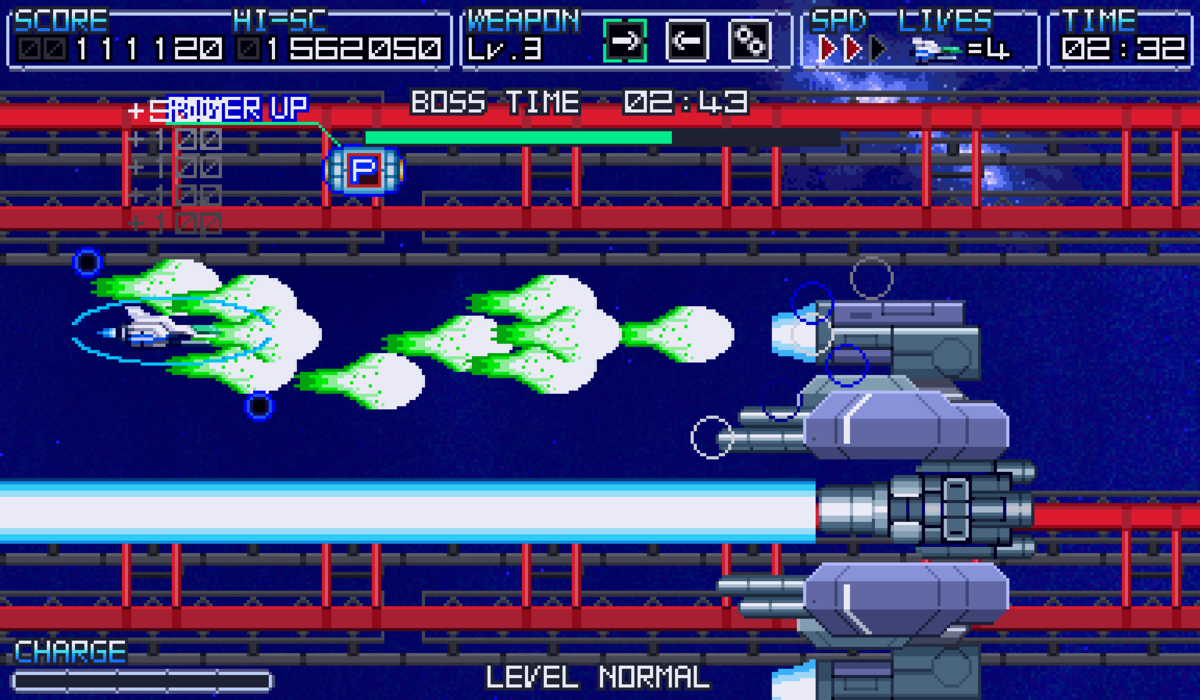 Equipped with roll units by getting the "R" item. Roll units will rotate around you and your attacks will be strengthened. 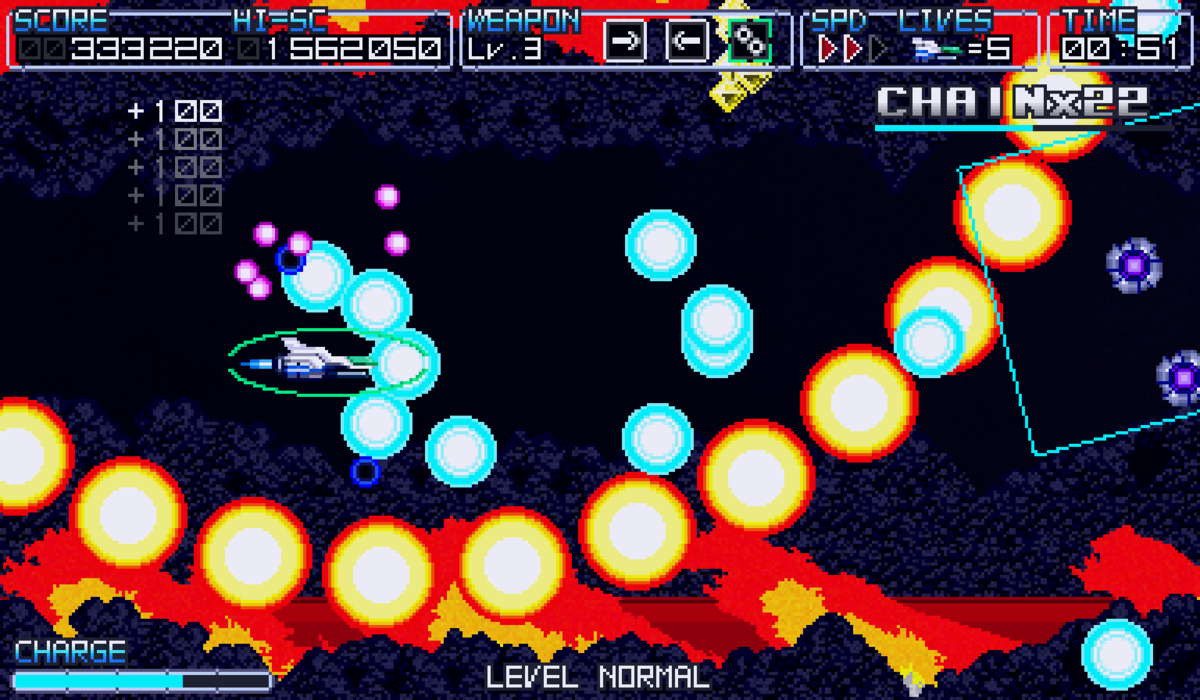 Charge shots are effective against hard enemies such as medium-sized enemies and bosses. If you feel that the firepower is not enough, use the charge shot. However, since the shot is not fired while charging, there is the risk of being attacked by the enemy during that time. Therefore, the timing of charging is important.

Equipped with a defender by getting the "D" item. You can block up to 3 bullets. The item's spawn position is fixed, so be sure to get it.

If you lose your life, you will be revived on the spot if you have life left. At the same time, the weapon level will return to the initial level.

If you lose all remaining lives, it's game over. After the game is over, it is possible to select Continue. When continuing, it will start from the beginning of the current stage. There is no upper limit to the number of continues.

Destroying enemies in succession creates a chain, and you can get a chain bonus when the chain ends.

In my previous work, when you defeated an enemy formation, the next enemy formation appeared. On the other hand, in this work, the placement of enemies is fixed. Therefore, it may be difficult to intentionally aim for chain continuation. I think that defeating enemies without omission will eventually lead to the continuation of the chain. 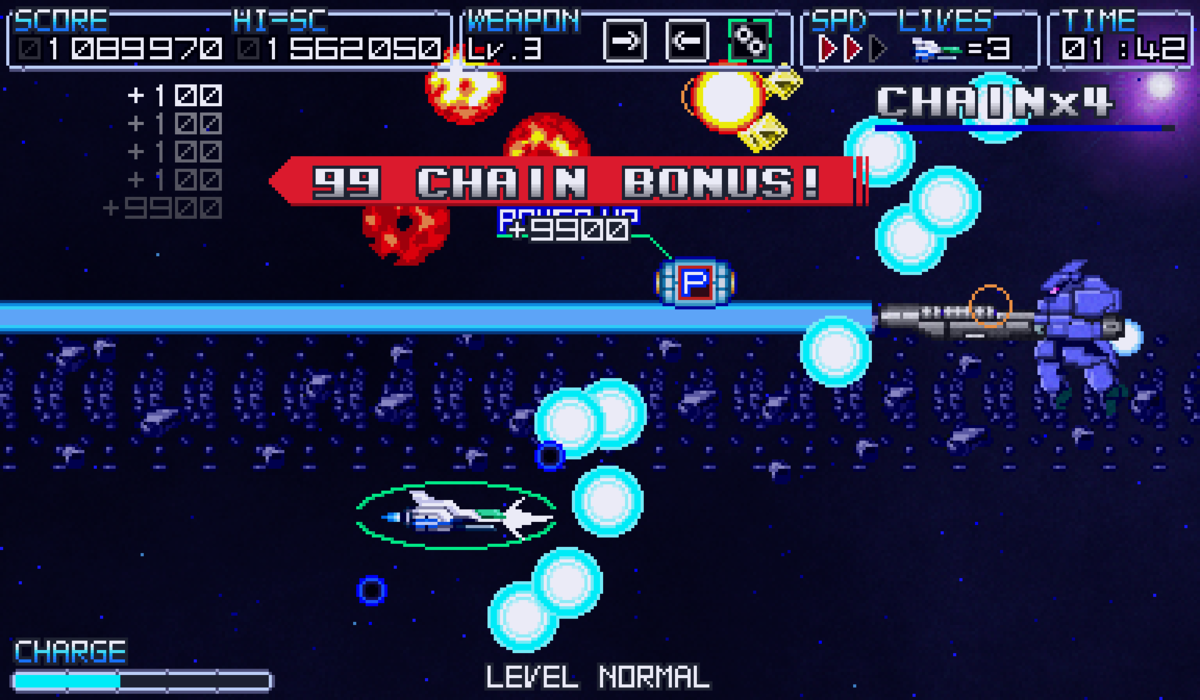 For the first time in this work, I implemented hit stop. When you get hit, the screen freezes for about 0.5 seconds, so you can visually understand why you were hit. As shown in the screen below, the red square in the center is your hit range (the red square is displayed only at the moment of being hit). Hitstops are not implemented in traditional Shmups, but I think it's a interesting idea. 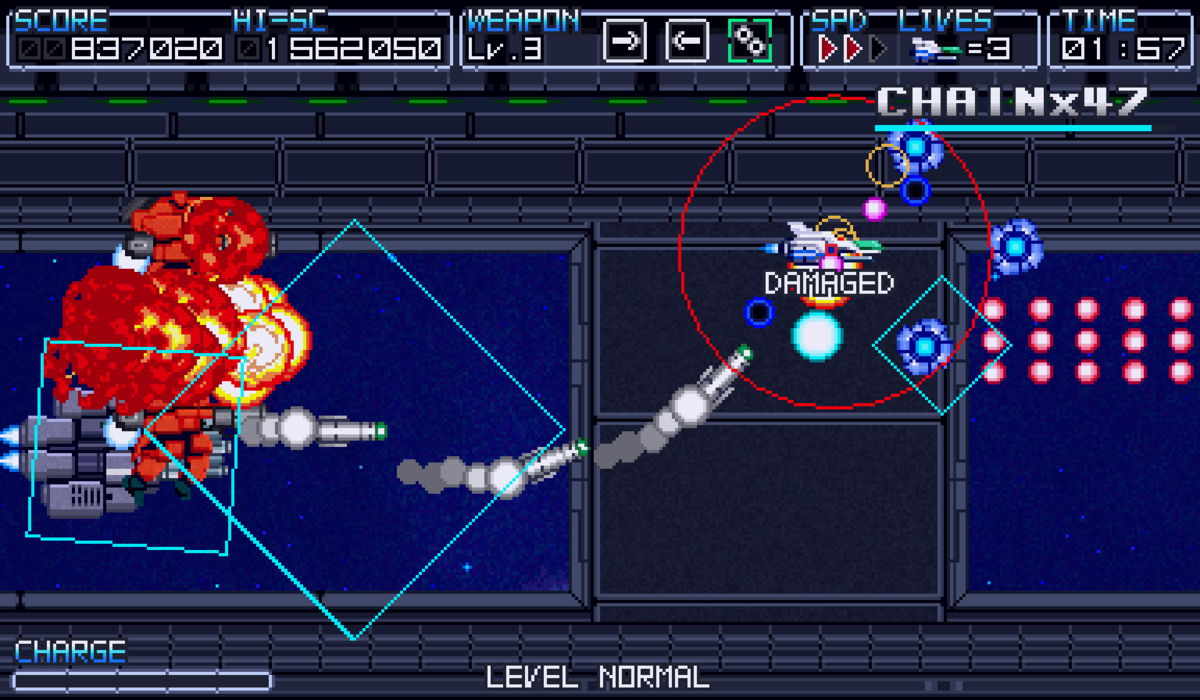 There are 3 difficulty levels to choose from: Normal, Hard, and Expert. If you clear all 8 stages, the mission is completed. It's basically horizontal scrolling, but depending on the stage, there are stages that scroll up and down on the way. Or there is a scene that you can scroll slightly up and down at your discretion. Each stage boss battle has time remaining, and the faster you defeat it, the more time bonus you can get. 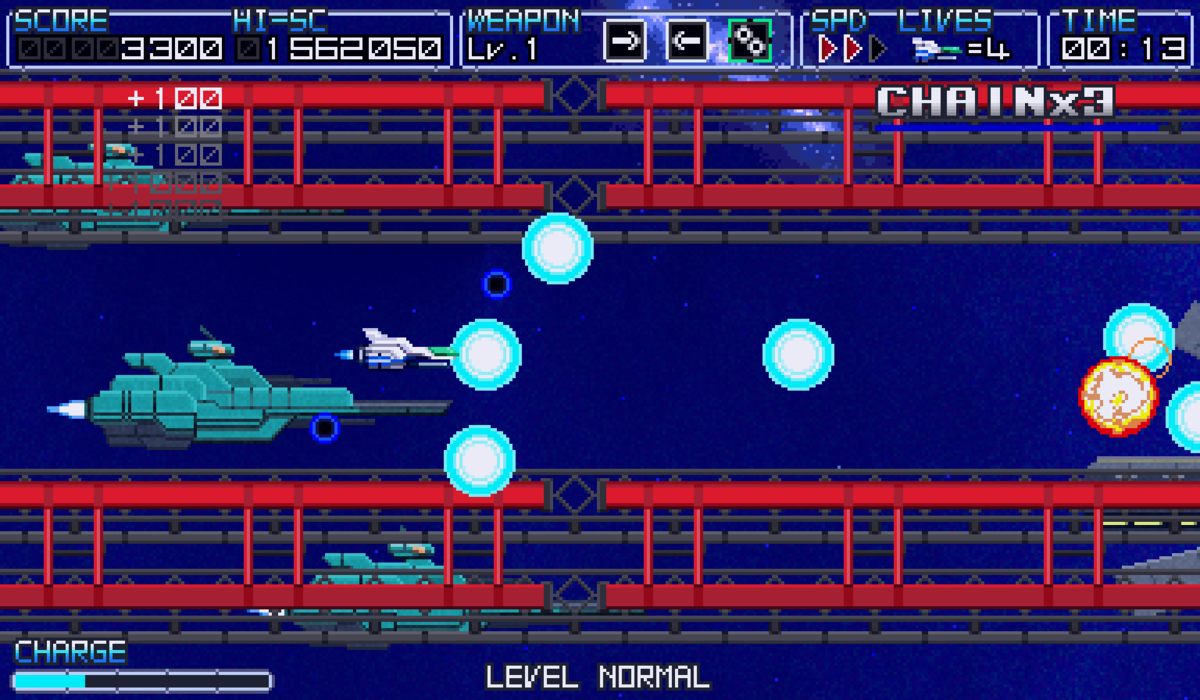 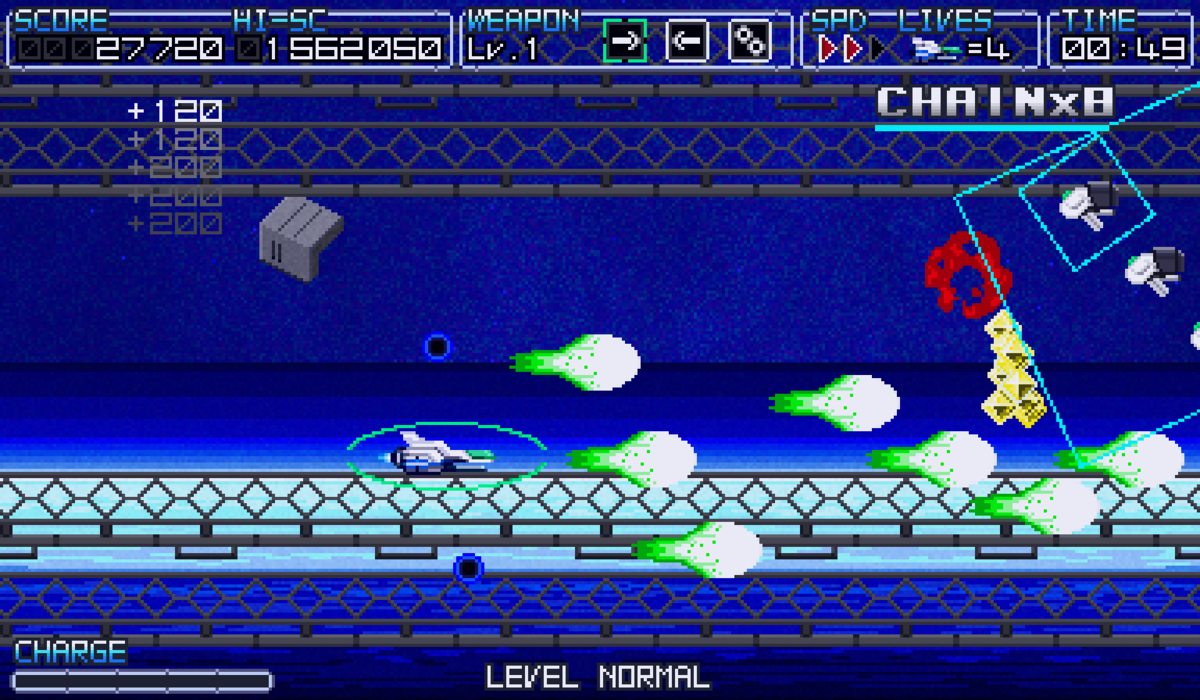 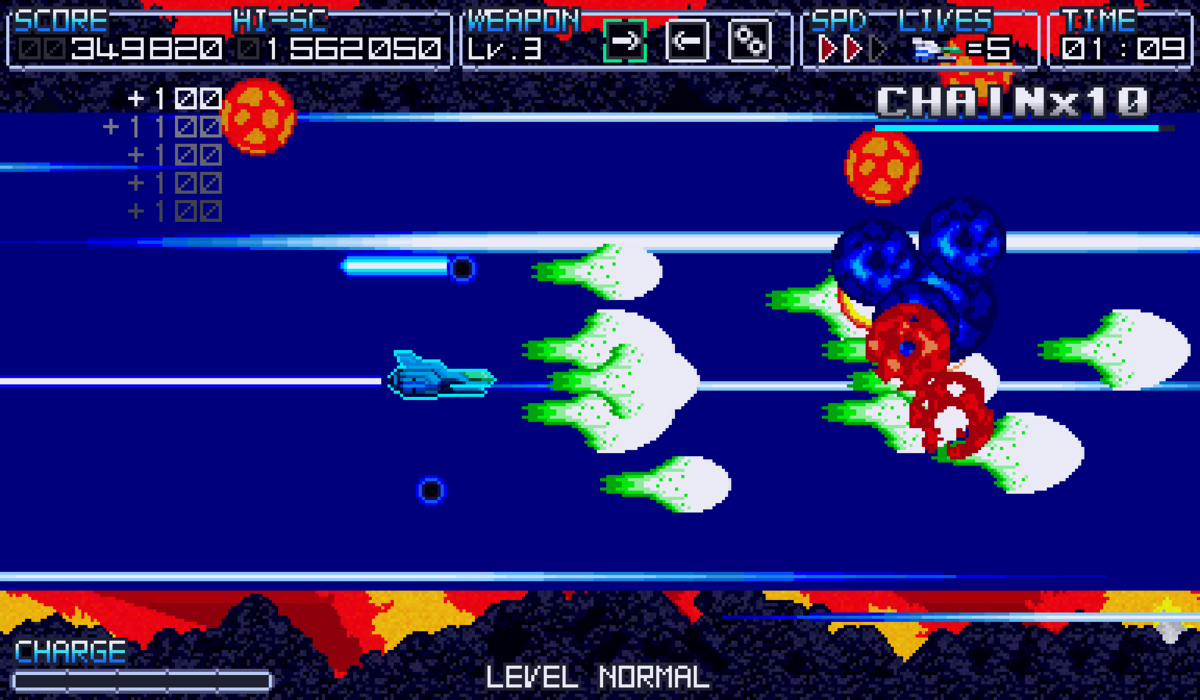 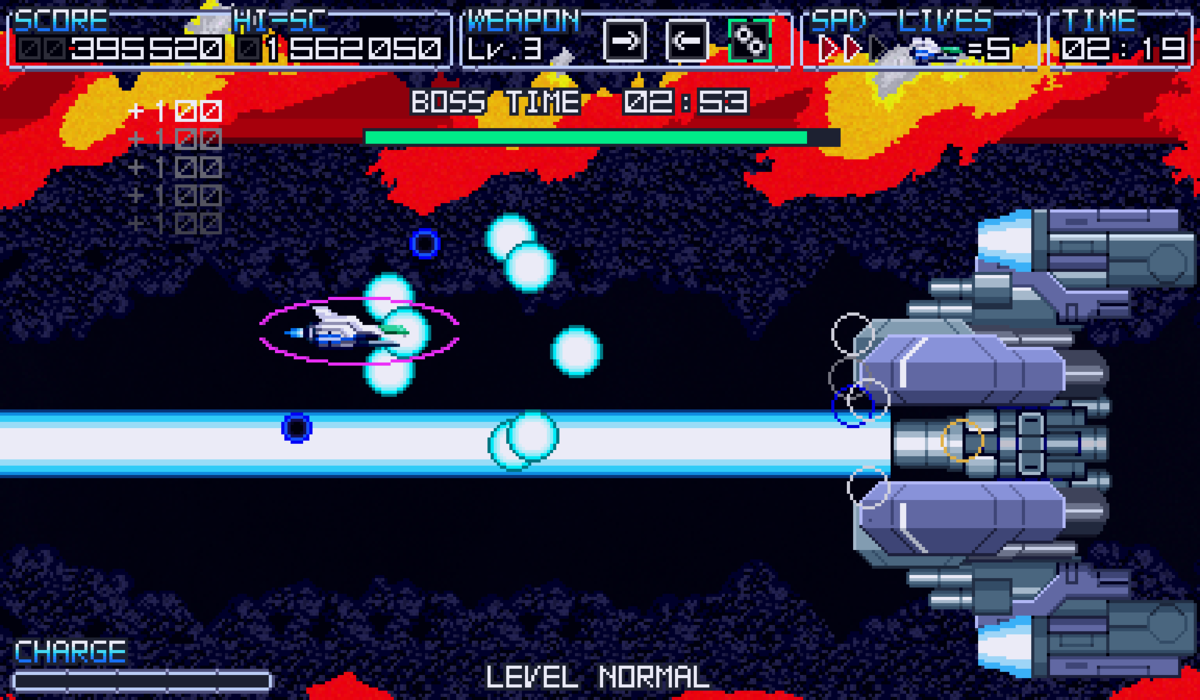 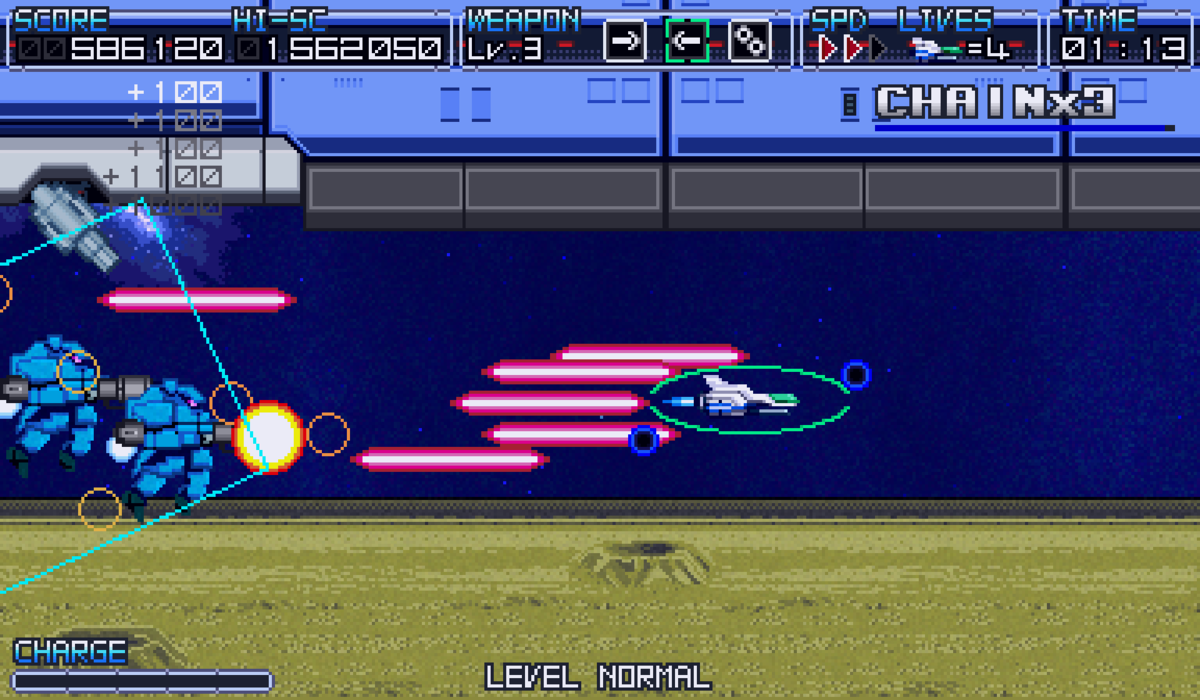 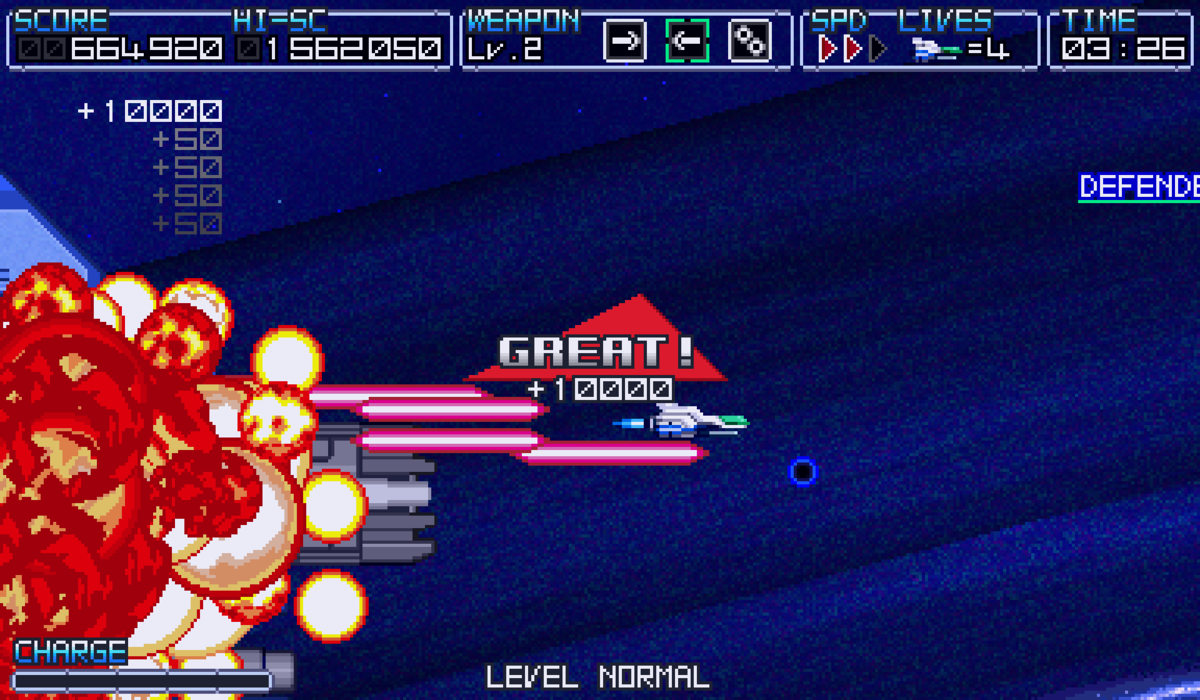 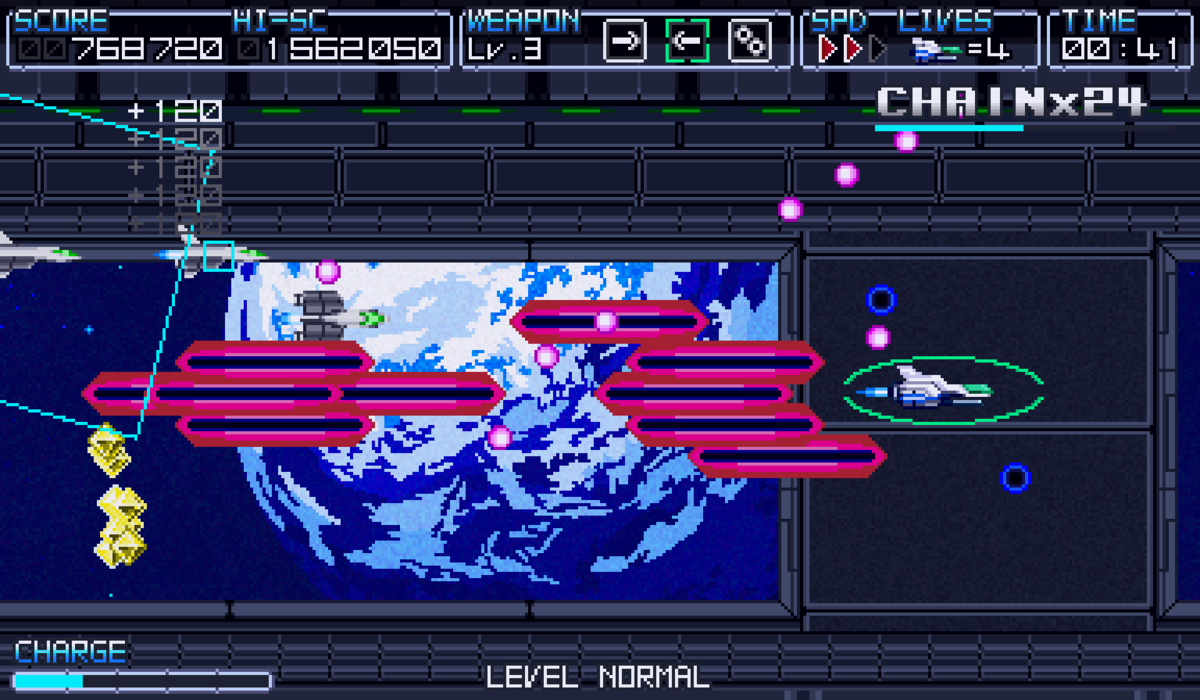 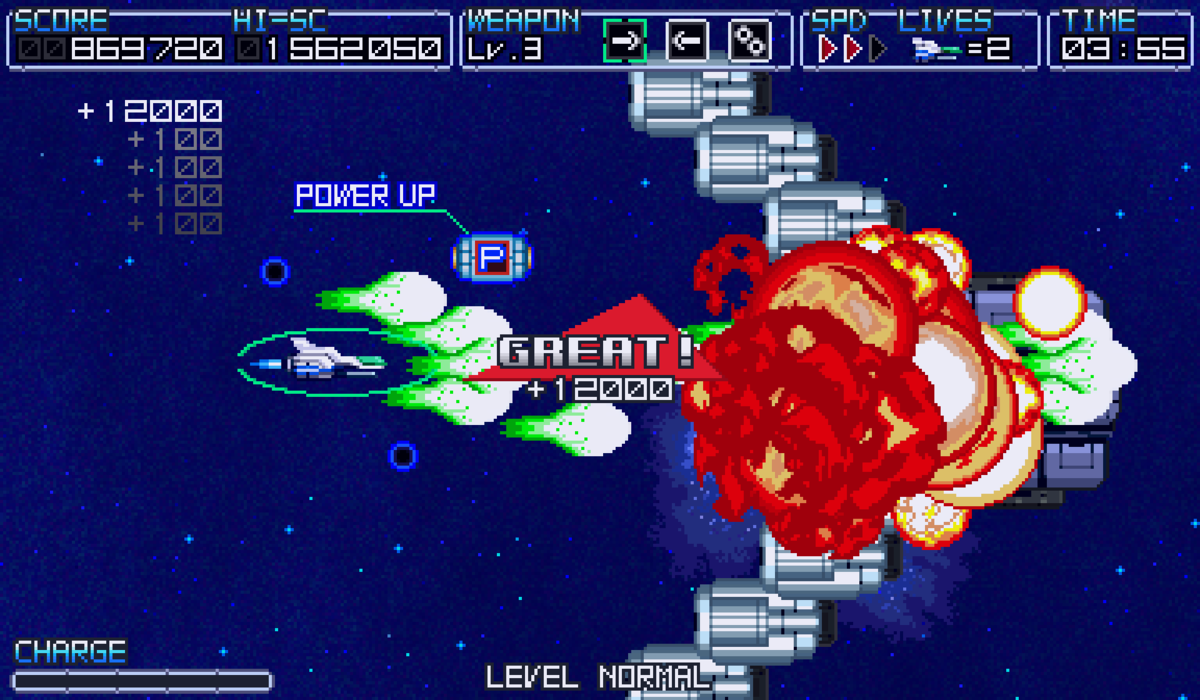 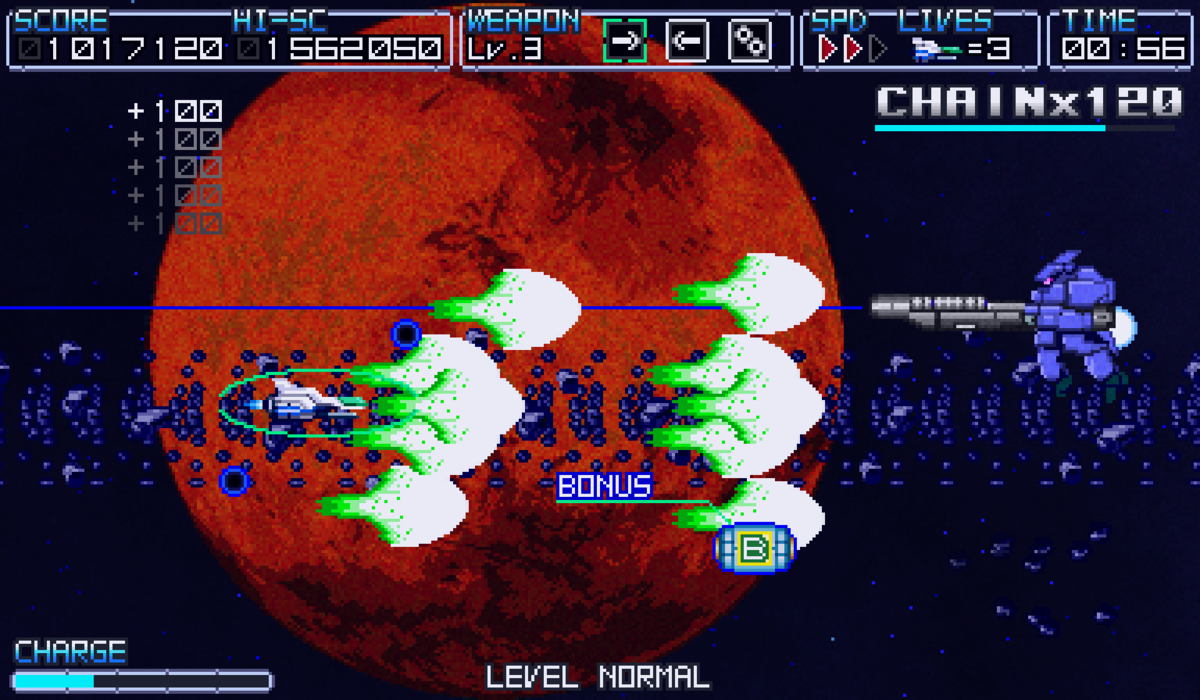 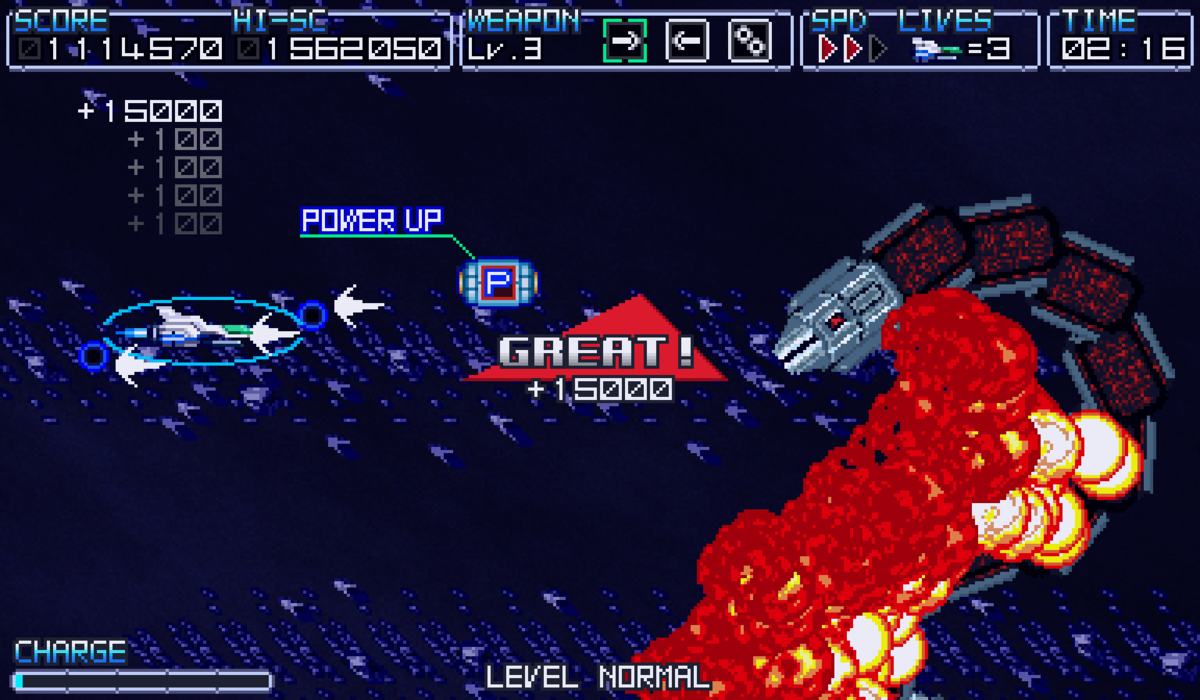 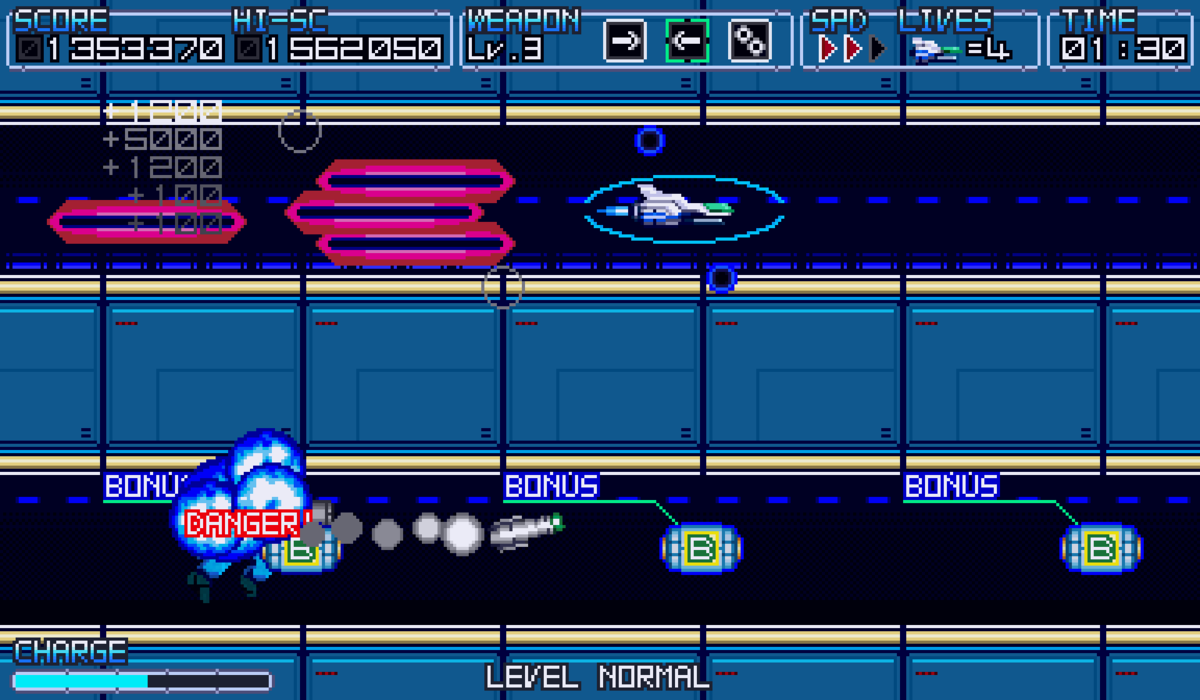 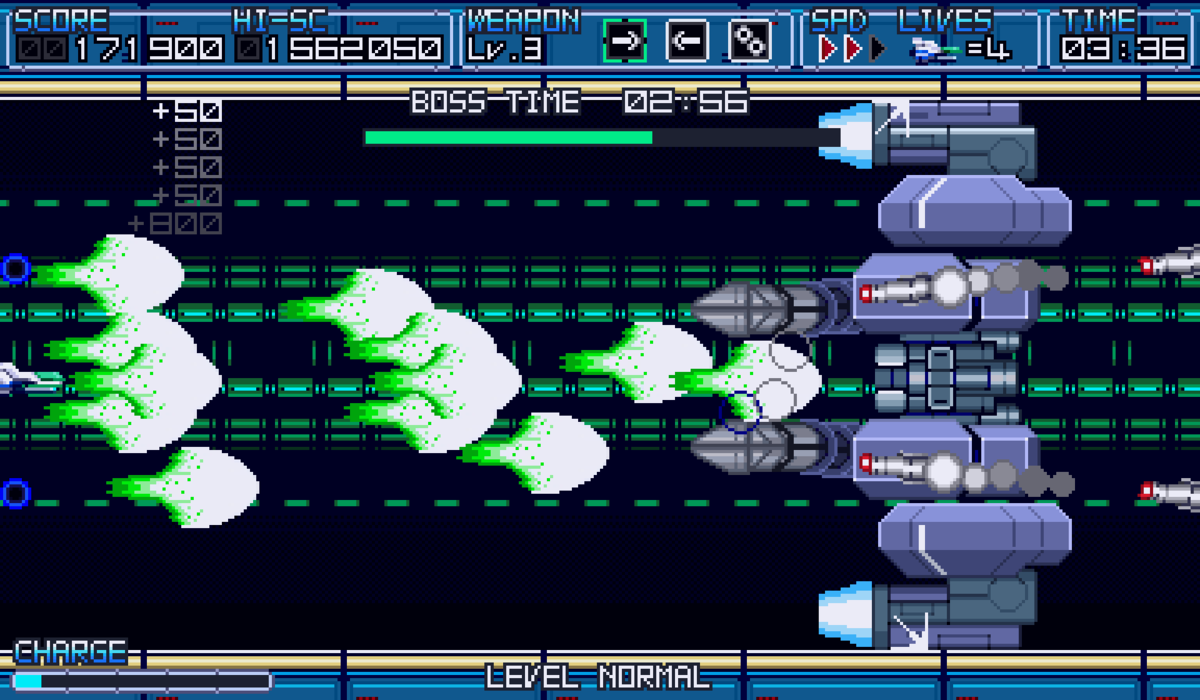 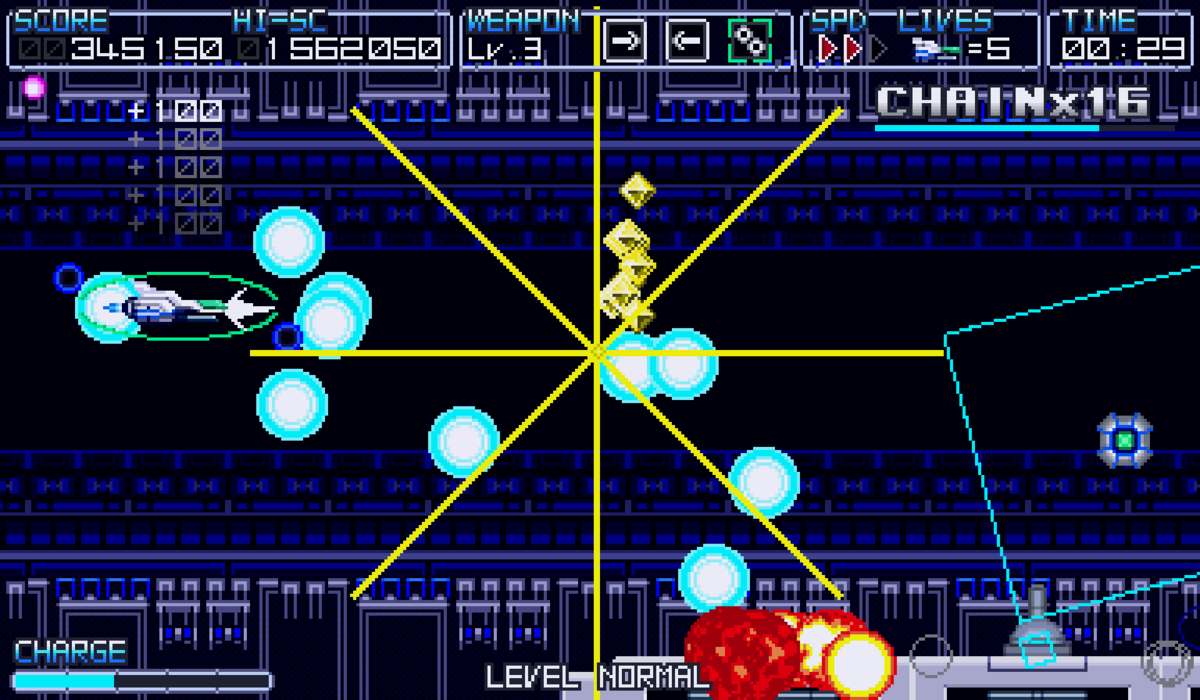 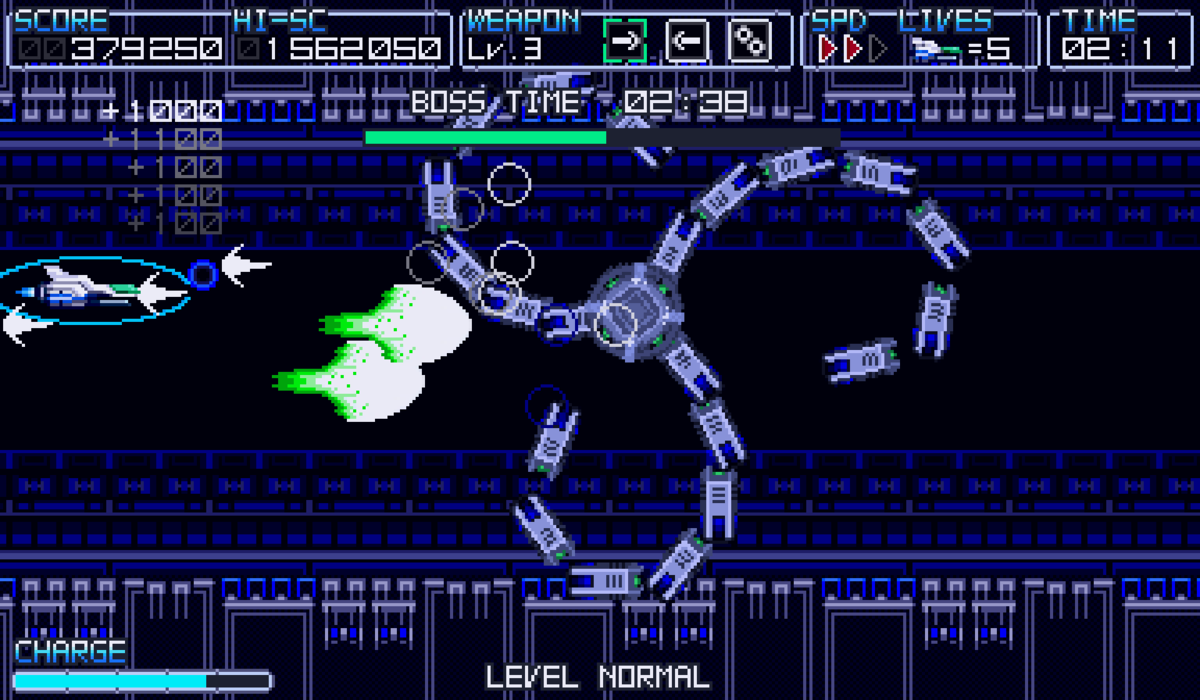 3 minute score attack mode. The game ends after 3 minutes. Also, the game ends when you lose all your lives. A boss appears in Caravan mode. By defeating this boss quickly, the next enemy will appear, so it is important to defeat the boss as soon as possible. 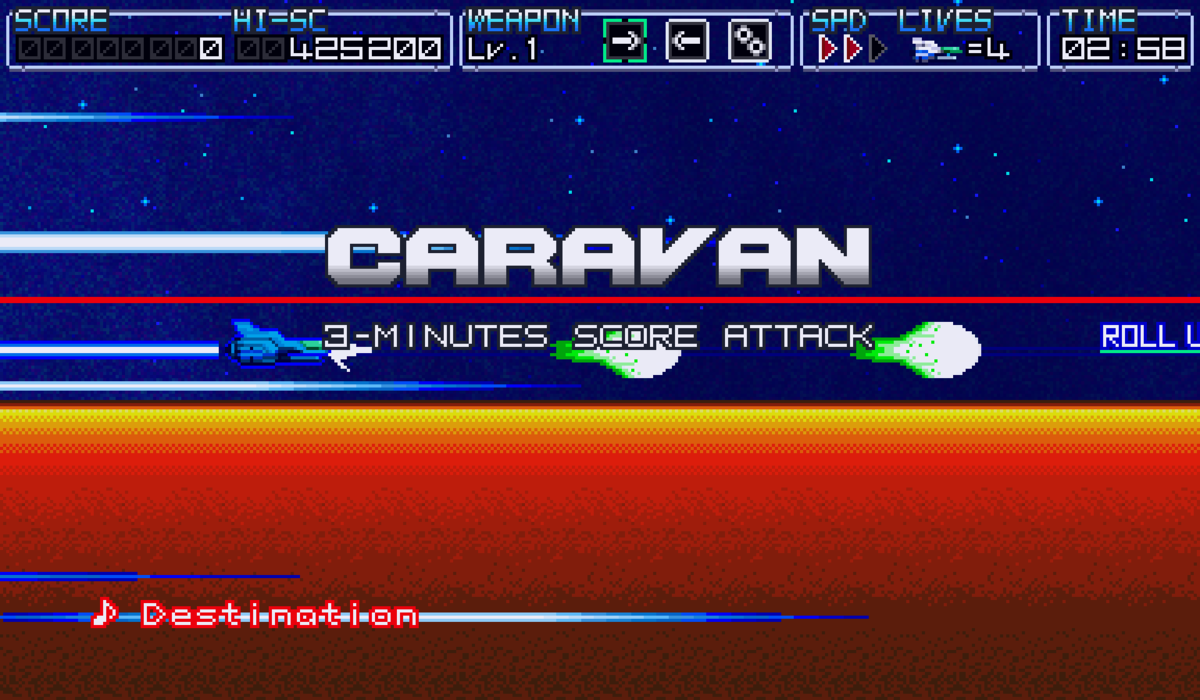 I've made a lot of vertical shmups. This time, I took on the challenge of creating a horizontal shmup (There is also Gemini Arms, but this is the first standard horizontal shmup).

First, I made this work as a standard shmup. Next, I added a dedicated system for real-time weapon switching.

It's also difficult to press the button to switch weapons sequentially. So I limited the weapon types to 3 and assigned each weapon to a given button. This makes it easier to switch weapons.
Furthermore, it is easier to revive by not losing weapons due to being hit.

My specialty is programming, but I'm a total game creator. I haven't given up on drawing graphics myself. You can see my graphic growth in this work.

Terra Flame is a nostalgic game inspired by 90's horizontal shmups. On top of that, I've incorporated the experience I've gained from my previous works to create a modern, friendly, playable, and exhilarating shmup.

I do my best in all my work. I hope that you will continue to enjoy my work.