The Steam page of "Raging Blasters" has been opened. It will be released on January 22, 2021. And I have released a free demo version in advance. It has only the caravan mode. And it supports online ranking. If you like the demo version, please add to your wish list.

The title "Raging Blasters" has a STG feel, so I chose this one. It's rare for a caravan-type STG to be able to play two players, so I added the "s" at the end of the word.

The concept of this game is " Speed ​​& Destruction STG ". My recent works, "Missile Dancer" and "Gemini Arms," ​​were different from the standard STG, and were specializing in missiles and lasers. I have complete these works. So I wanted to make an standard STG for my new work.

Before planning this game, I looked back on how I became a fan of STG. When I was a kid, I longed for the arcade STG, but I actually played a lot with the console STG. I was particularly influenced by the PC-Engine and MegaDrive STG. The console games ported from the arcade were arranged and easy to play, and many original works were released.

Currently, the arcade STG is completely ported for the Nintendo Switch or PlayStation4, but I find it difficult to play arcade STG now. I realized that the console STG has a different appeal than the arcade STG. Therefore, I wanted to make a new STG that was influenced by the old console STG.

However, I don't make this game with nostalgia. From the time I was a kid, I'm a future person, so I thought about how to make it more interesting from the current point of view.

This work is a vertical scroll STG, but it does not have a vertically long screen like an arcade STG. I have optimized the configuration for a wide screen. The actual operable area is only the central part. This is about the same size as the old console STG. If you can move the full screen, it will be too wide, so you can operate only the center area. Informations such as scores has been placed on the left and right. And I made the left and right backgrounds transparent. I designed this game optimized for this screen configuration. Since the screen is a little wide, I thought that it is nessesary to use 5-ways shot so that shot sideways or diagonally. 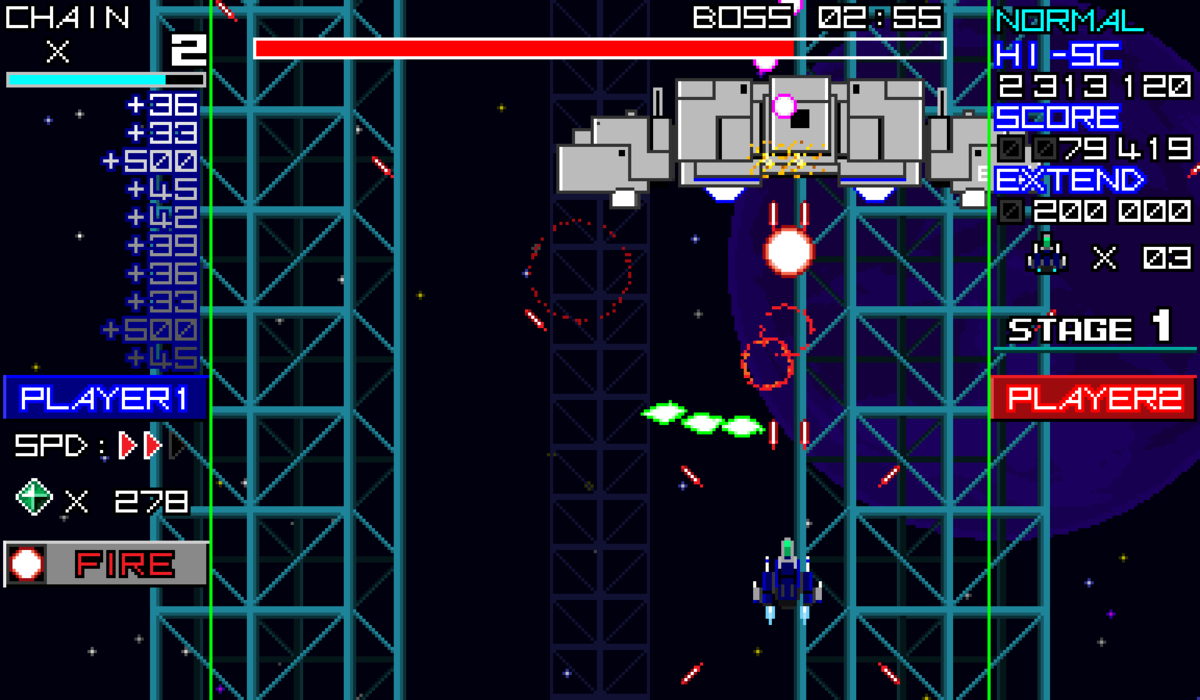 I think one of the big features of scrolling STG is the scrolling of the background .

In fact, STG consists of only one screen. But by scrolling the background and moving the enemy, the player is given the illusion that his / her aircraft is moving forward.

I wanted to emphasize this feature, which can give a sense of speed by using the illusion. In this game, the scrolling speed changes frequently.

Recent STGs have slow backgrounds and the background graphics are detailed. Enemy bullets are displayed slowly and in large numbers. I made this game in the opposite direction.

For STG, it is important to feel comfortable hitting a shot and destroying the enemy. I created the feeling of hitting the shot and the exhilaration of destruction.

I have adopted a core system for bosses and medium-sized enemies. Only the core can be damaged, and the surrounding parts are covered with a defensive wall. And when the core is damaged, it makes a pleasant sound. A total of 12 bosses will appear, including the middle boss.

Also, for exhilaration, small enemies can be destroyed quickly. Instead, small enemies move fast, so you need to be careful about contact with them. Enemy hardness is the same for all difficulty levels. Difficulty adjustment is changed by the pattern, not the hardness of the enemy. This allows you to enjoy playing with a sense of exhilaration no matter what difficulty level you play.

Music
The music for Raging Blasters was created by Hirokkey. He was enthusiastic about making STG music, so I asked him to make music for this game.

First I created the stage and made the video. He watched the video and create the music. From this method, the game and music are in harmony. There is a original sound track DLC, so please enjoy music as well.

The weakness of my works was that there were no characters, but I think that the addition of his character made this work more attractive.

Pilot at the beginning of the game. Please look forward to the ending! 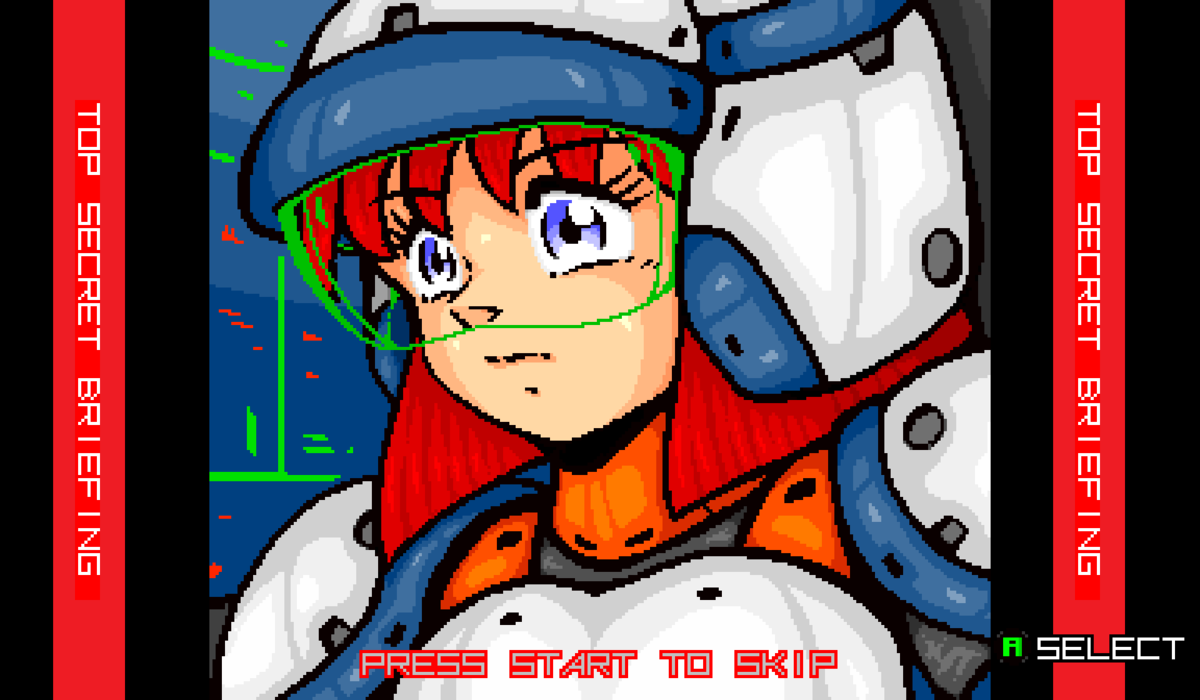 Graphic
It's simple because it's drawn by myself as a programmer. I drew it to be unified as a whole. It's a completely new work, so I can create a dynamic game by creating graphics while programming. In addition, I have achieved both coolness and visibility, such as color combinations. 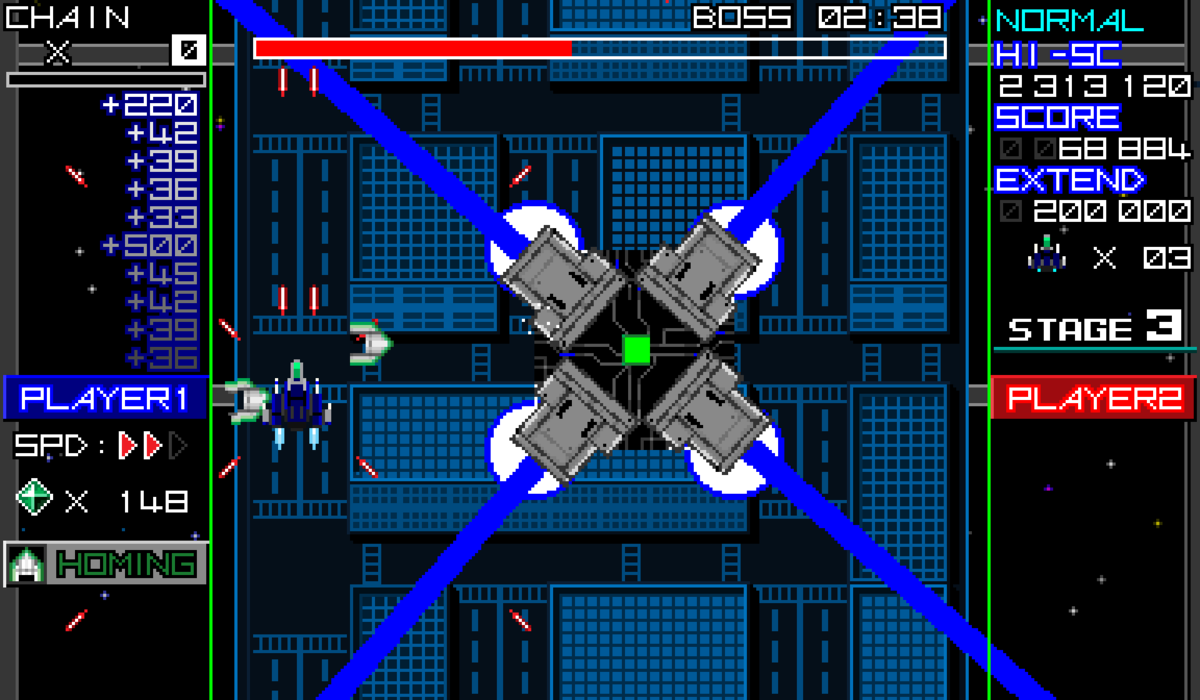 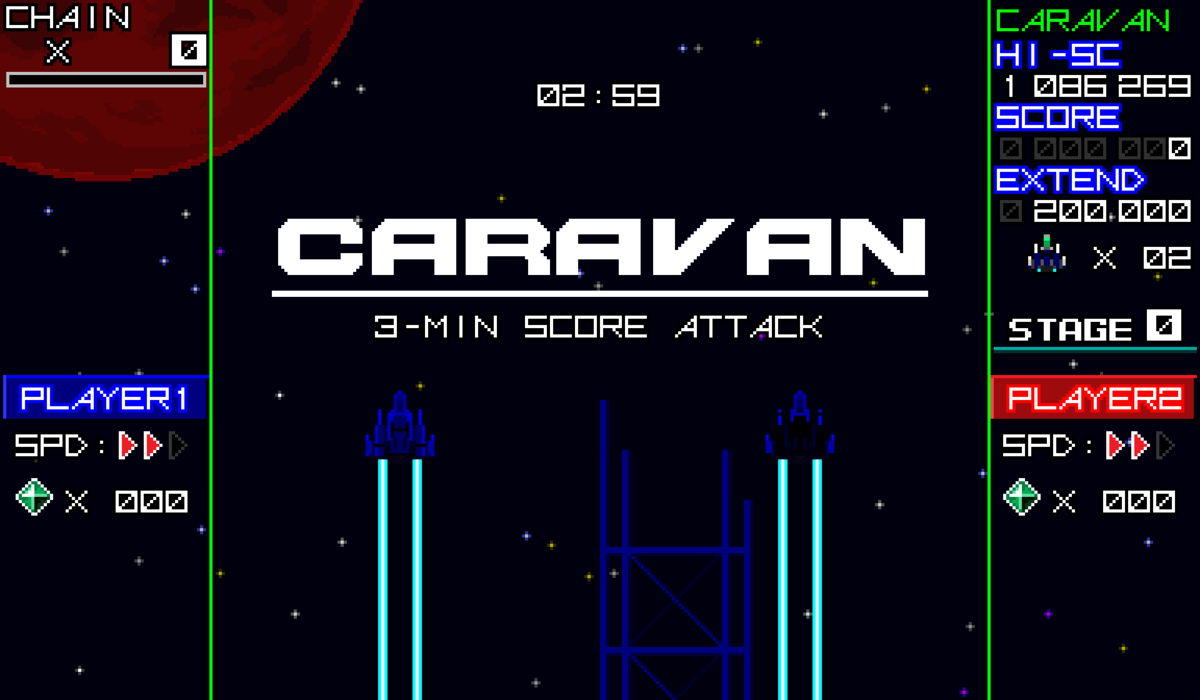 This game is a standard vertical scroll STG. There are two modes, Arcade mode that consists 8 stages and Caravan mode that performs 3-minute score attack. Arcade mode can be selected from 3 levels of difficulty. In both modes, two-player cooperative play is available. In that case, the remaining lives and the score are shared together. 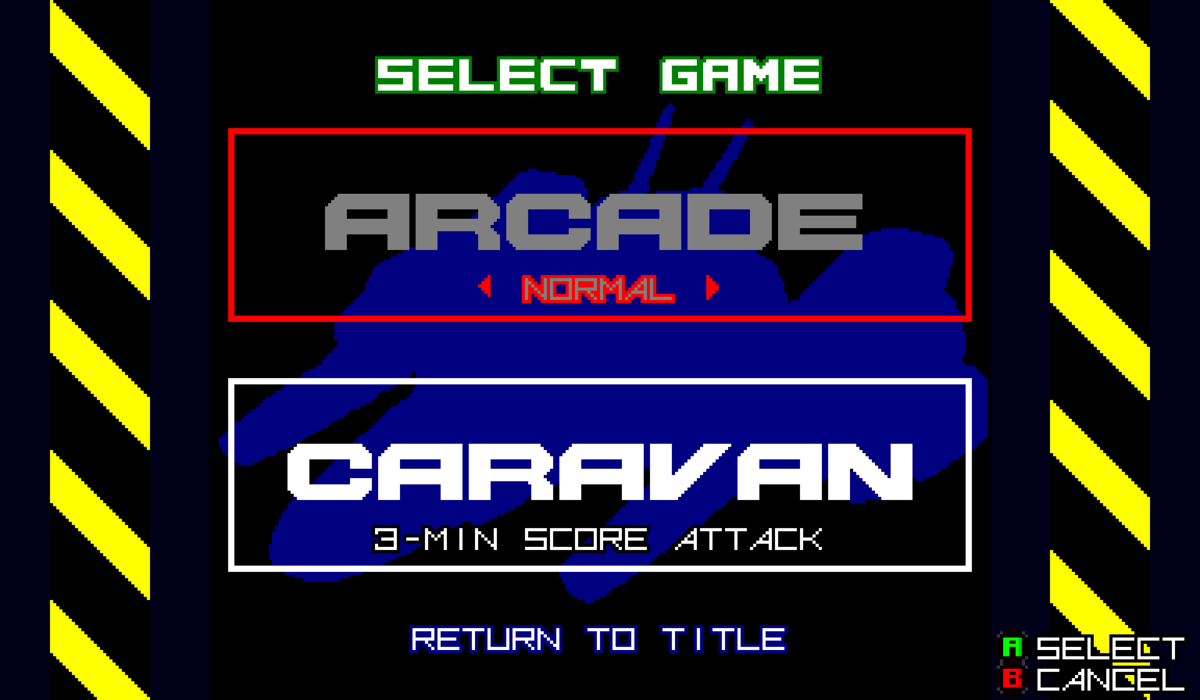 You can use the main weapon and the sub weapon to defeat the enemy. For the main weapon, you can assign two types of shots, forward shot and wide shot (5-way shot), to different buttons and switch freely at any time. You can switch your speed in 3 levels with the button.

In addition, the button settings of the controller can be changed freely. 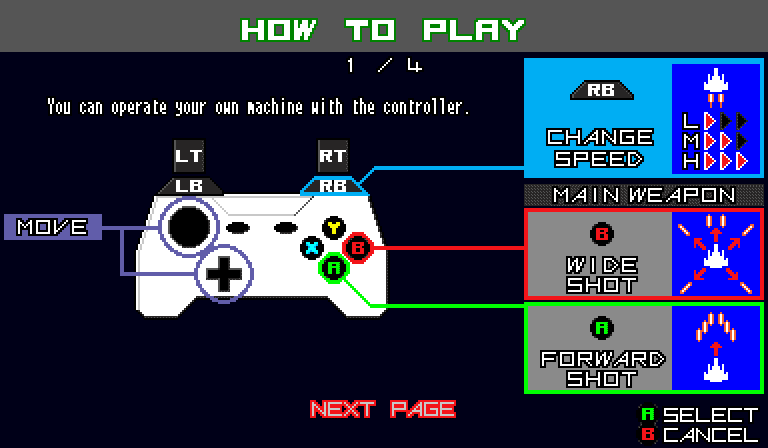 It also supports a keyboard (only when playing alone). 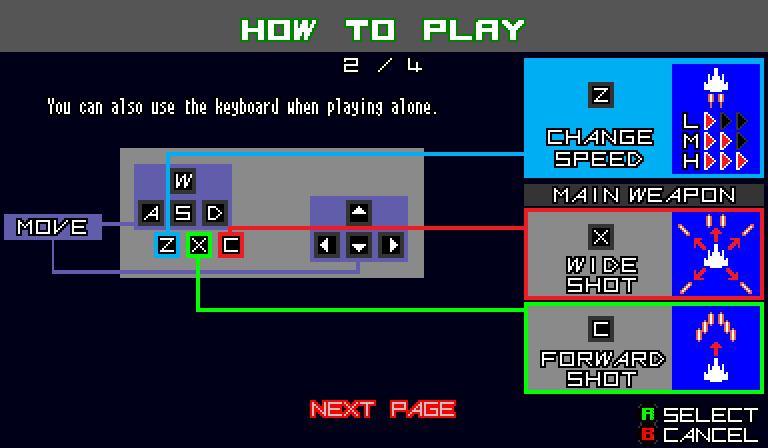 Sub weapon can be equipped by getting items that appear when you destroy the item carrier. There are 5 types: wave, ring, laser, homing, and fire. The point of the strategy is to use different sub weapons according to the situation. 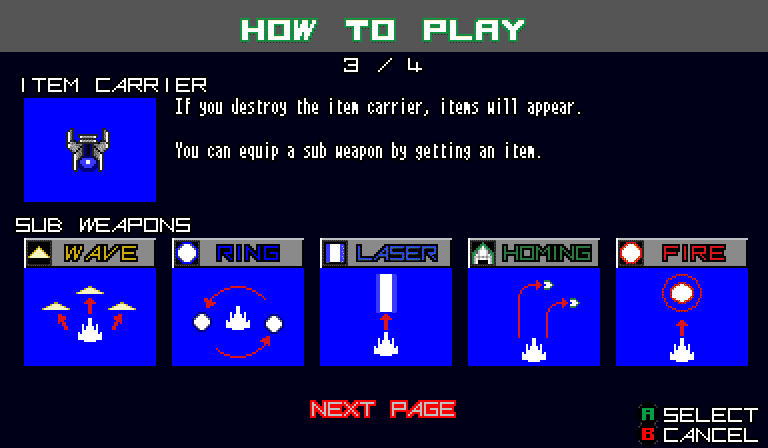 If you destroy all of the formation of enemies or destroy certain enemies, crystals will appear. If you get crystals, they will be added to the score when you clear the stage.

If you are hit, the crystal will be lost, so it is important not to hit it in order to get a high score.
If you destroy enemies in a row, a chain will occur, and a chain bonus will be added according to the number of chains. Also, you will get a higher score if you destroy an enemy while a chain is occurring. 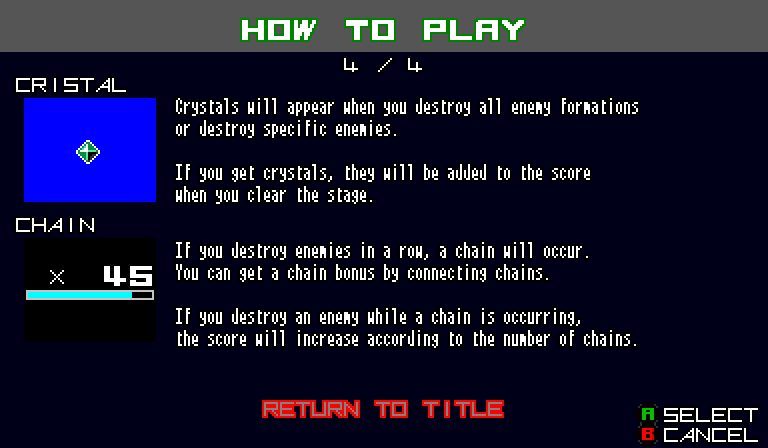 If you are hit, your ship will be destroyed with a single blow. In addition, the crystal will fall and the sub weapon will break. If there are any remaining lives, you will be back soon. The remaining lives will increase according to your score. If you lose all the remaining lives, the game is over. If you have credit left, you can resume from the beginning of the stage.

As you can see, the system is basically standard, but it has some features.

The main shot can be switched with a button because the screen is wide, so I thought it was necessary to have a weapon that could attack diagonally at any time.

Sub-weapons are all powerful weapons. For example, you can combine the main vulcan shot and the sub laser shot, so this is a novel combination.

Neither the main weapon nor the sub weapon will power up. This is to make it easier to recover after death.
In addition, I wanted users to actively take different types of sub-weapons. If you can power up your sub-weapon, you'll want to keep using only one weapon.

As a Steam-specific feature, it supports Remote Play Together. In addition, Steam has a track record function, which will also be impremented.

Scores are recorded both online and locally. You can compete with other players in the online ranking. You can also try to update your high score steadily by yourself.