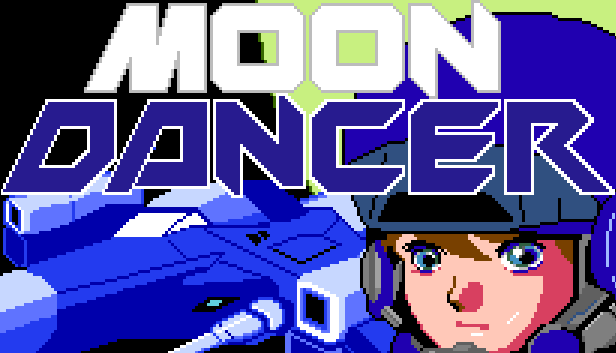 Concept:
Moon Dancer is a vertically scrolling Shmups featuring exhilarating lock-on laser. This game uses the NES color palette. The graphics are retro style, but like my previous work, it's a modern game with no stress. Not only the NES generation but also the younger generation can enjoy playing. The illustrations and color schemes are pop and cool. 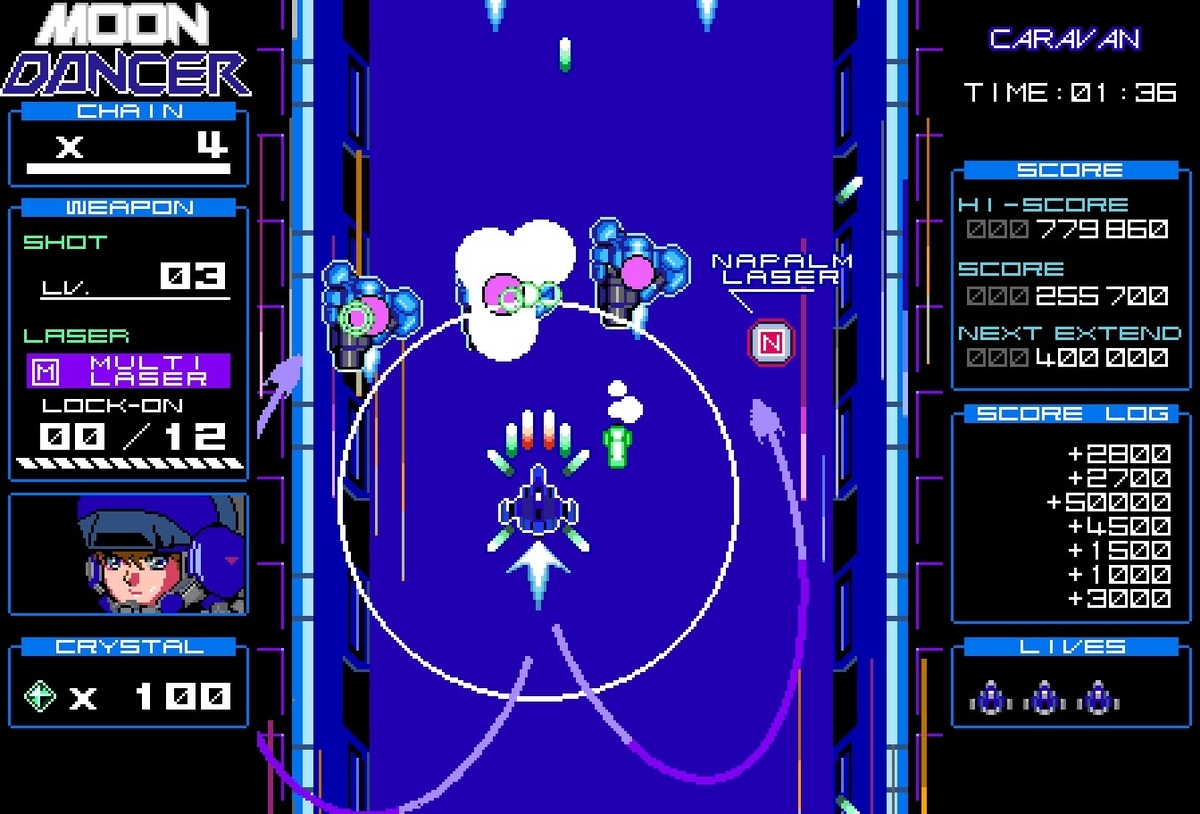 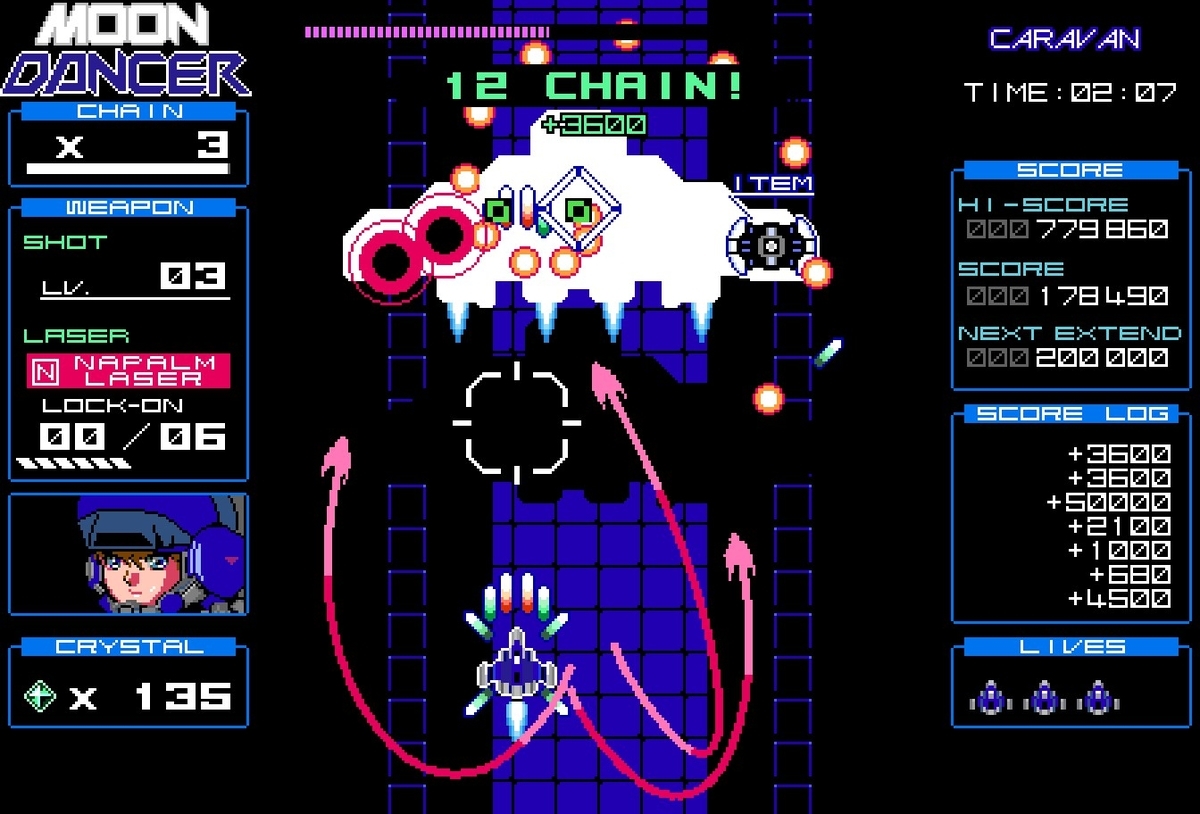 There are three types of lock-on lasers. You can change it by getting the item.

hitting them. However, the number of lock-ons is the smallest. 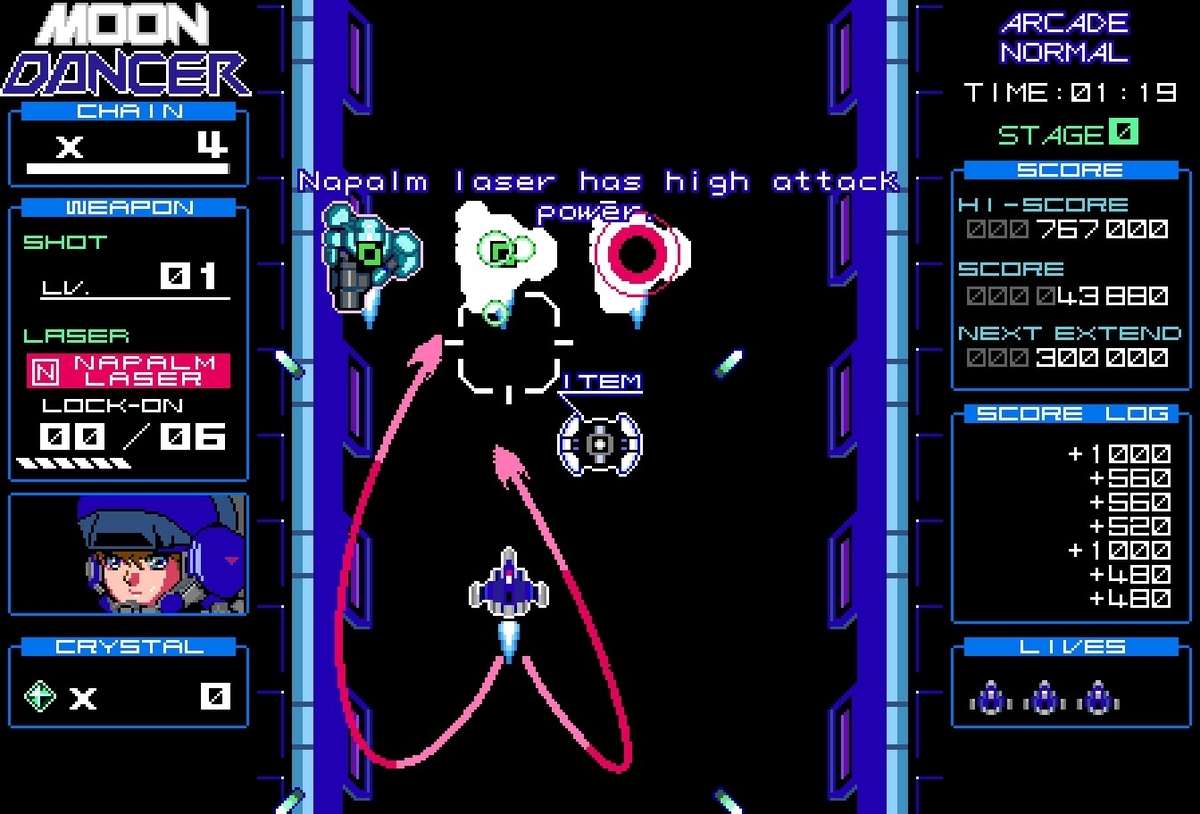 Multi laser can be locked on in all directions. The number of lock-ons is the highest. 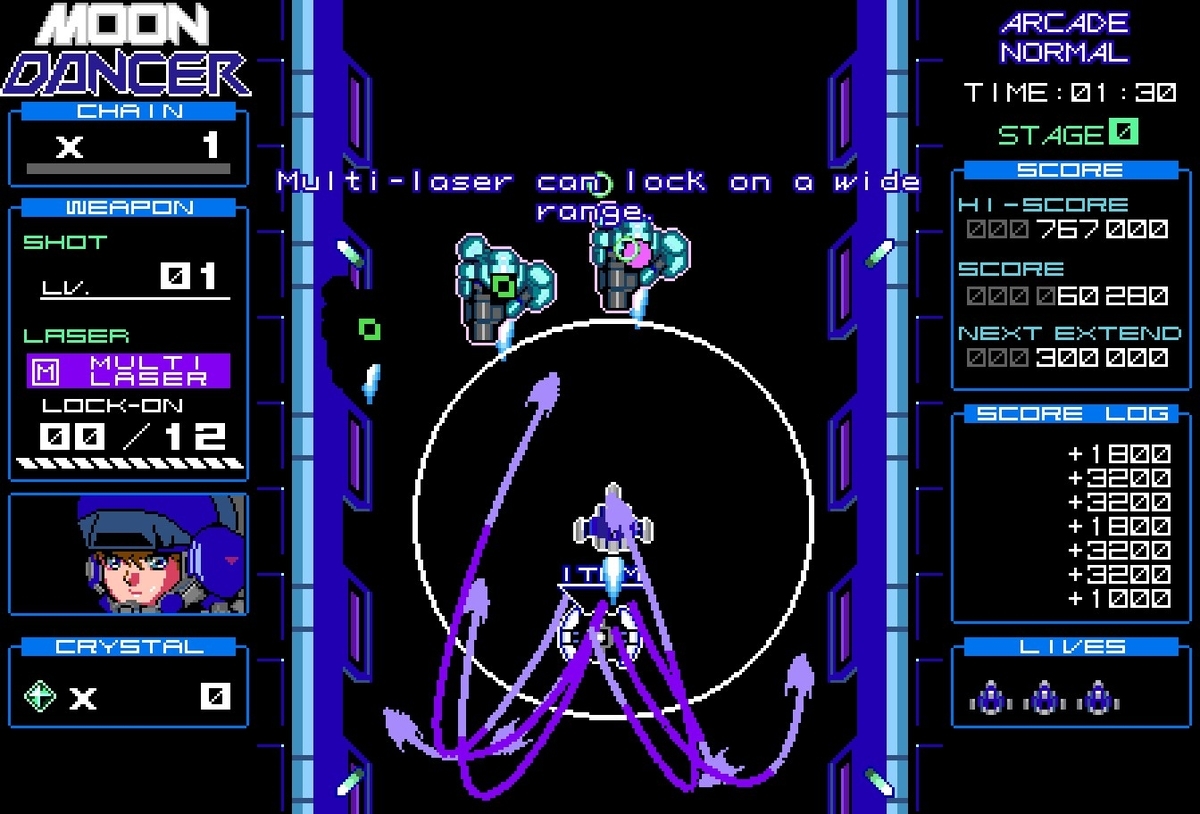 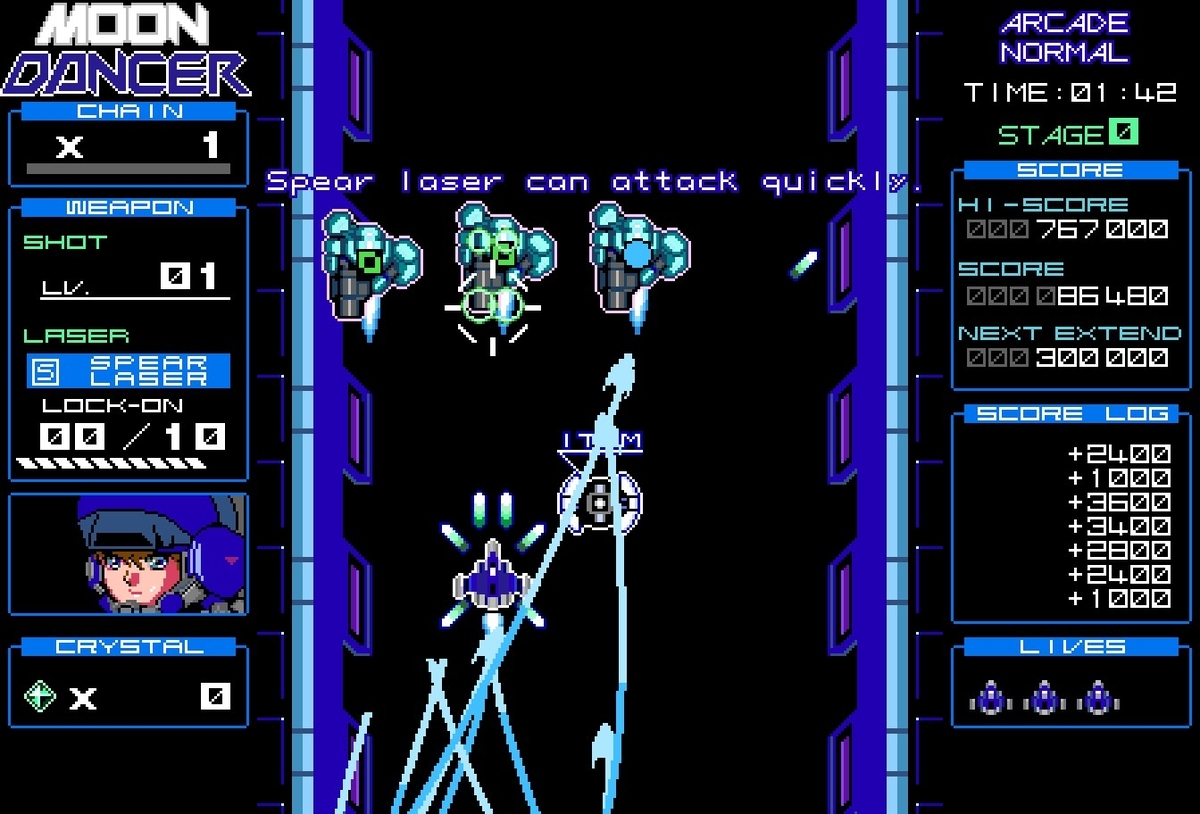 You can get a chain bonus by hitting the enemy with the lock-on laser continuously.
The attack power of the shot will increase up to level 4 when you get the P item.
If you get a crystal, it will be added to the score when you clear the stage. If you take damage, the crystal will disappear.
Even if it touches the enemy's body, it will not be damaged. If you touch an enemy bullet, an enemy laser, or an enemy missile, you will be damaged.
There is a tutorial, so it is recommended that you run the tutorial the first time you play.

Arcade mode:
The difficulty level can be selected from normal, hard, and expert. It consists of 8 stages. If you break through all the stages, the game will be cleared and the ending will be displayed.

If you lose all the remaining machines, the game is over. However, there is no limit to the number of credits. If you want to continue the game, it will start from the beginning of the current stage. 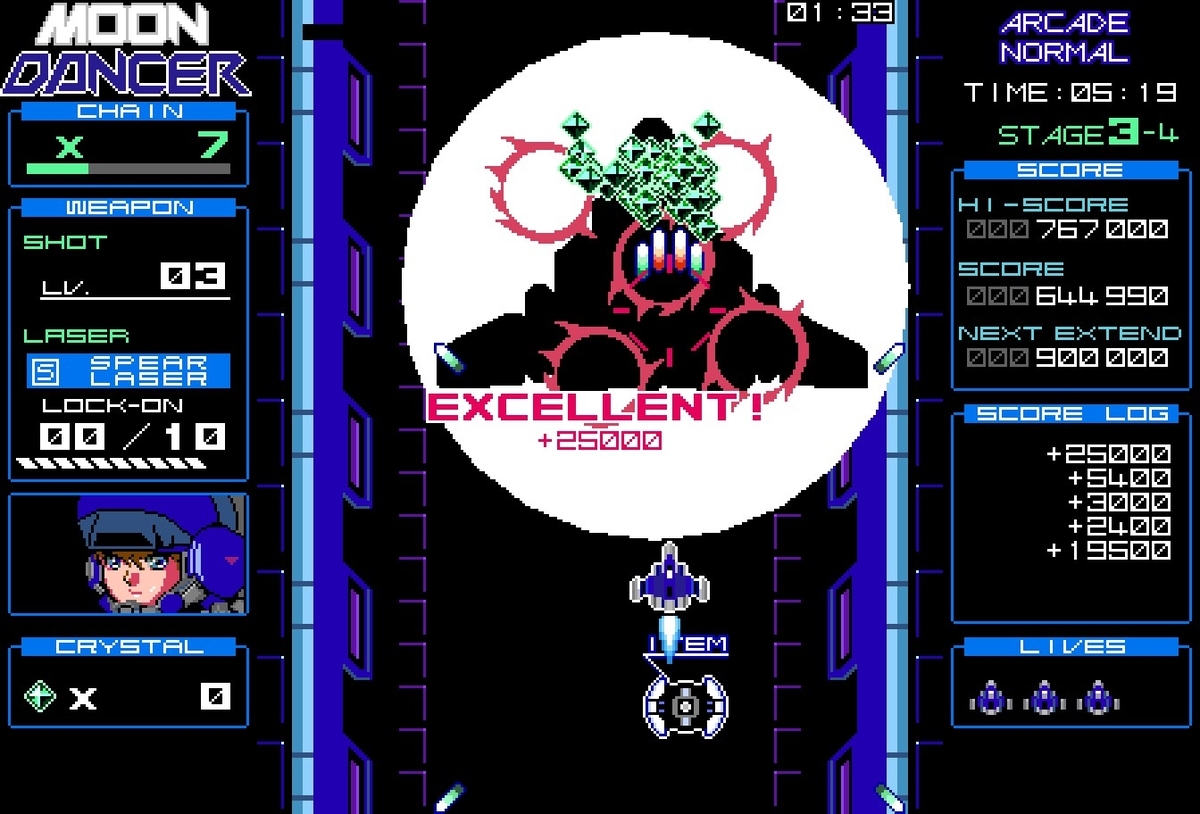 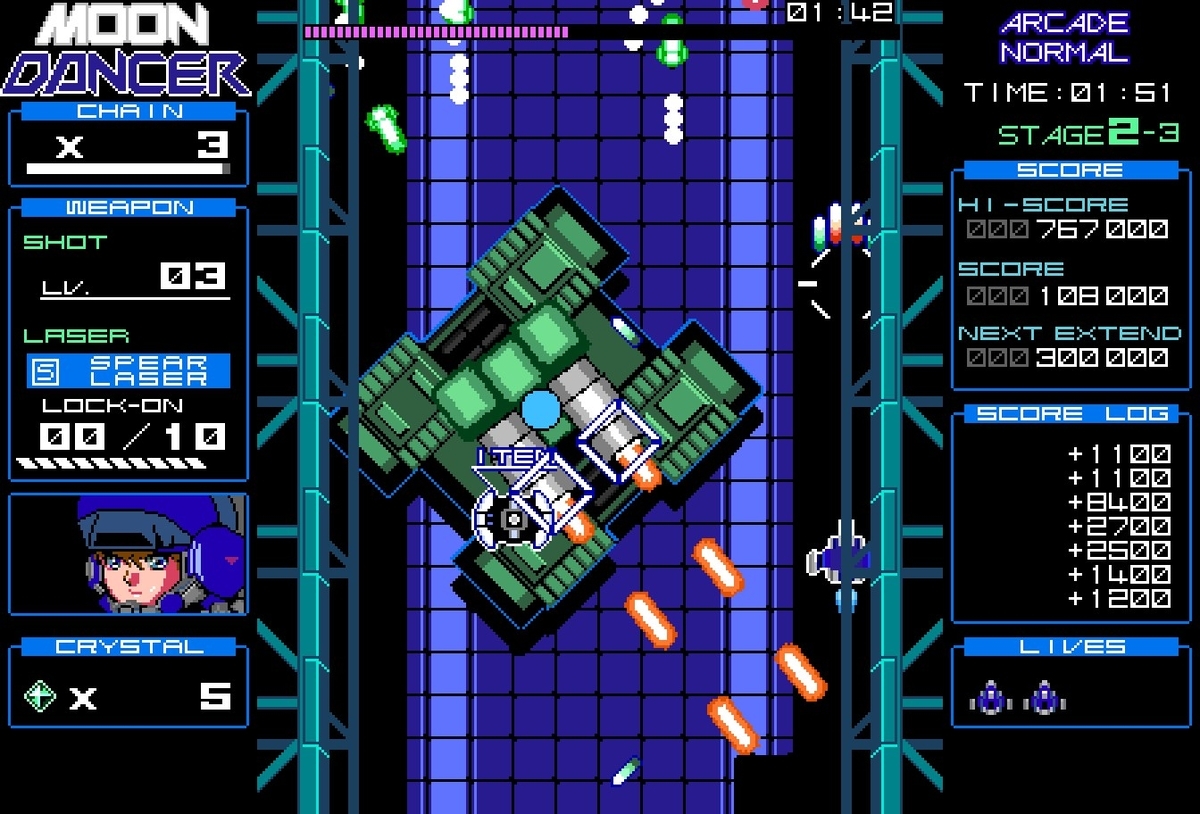 Caravan mode:
This is a score attack mode limited to 3 minutes. The game will end after 3 minutes. Also, the game will end when there are no more remaining machine. When you take damage, you can resume on the spot if you have remaining machines.
If you destroy an enemy formation, the next enemy formation will appear, so destroying the enemy as soon as possible will lead to a high score.
It's also important to connect chains to get chain bonuses. 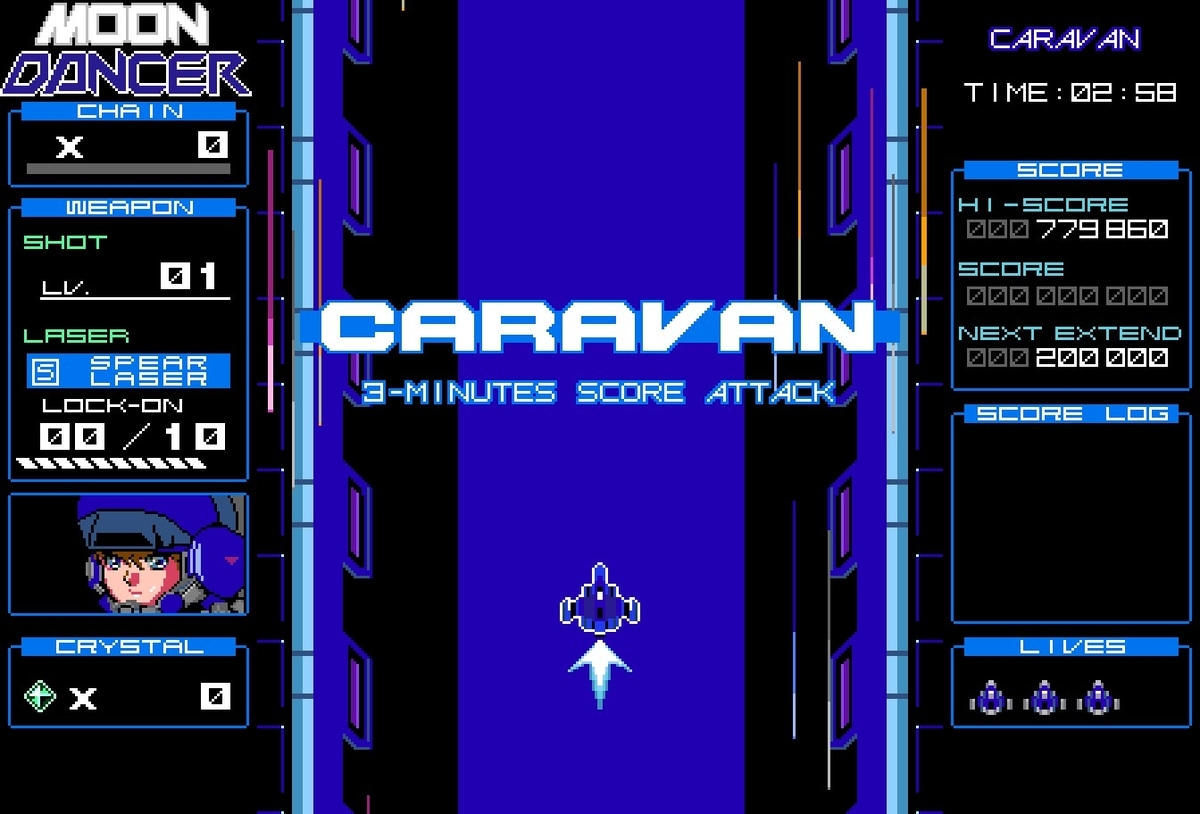 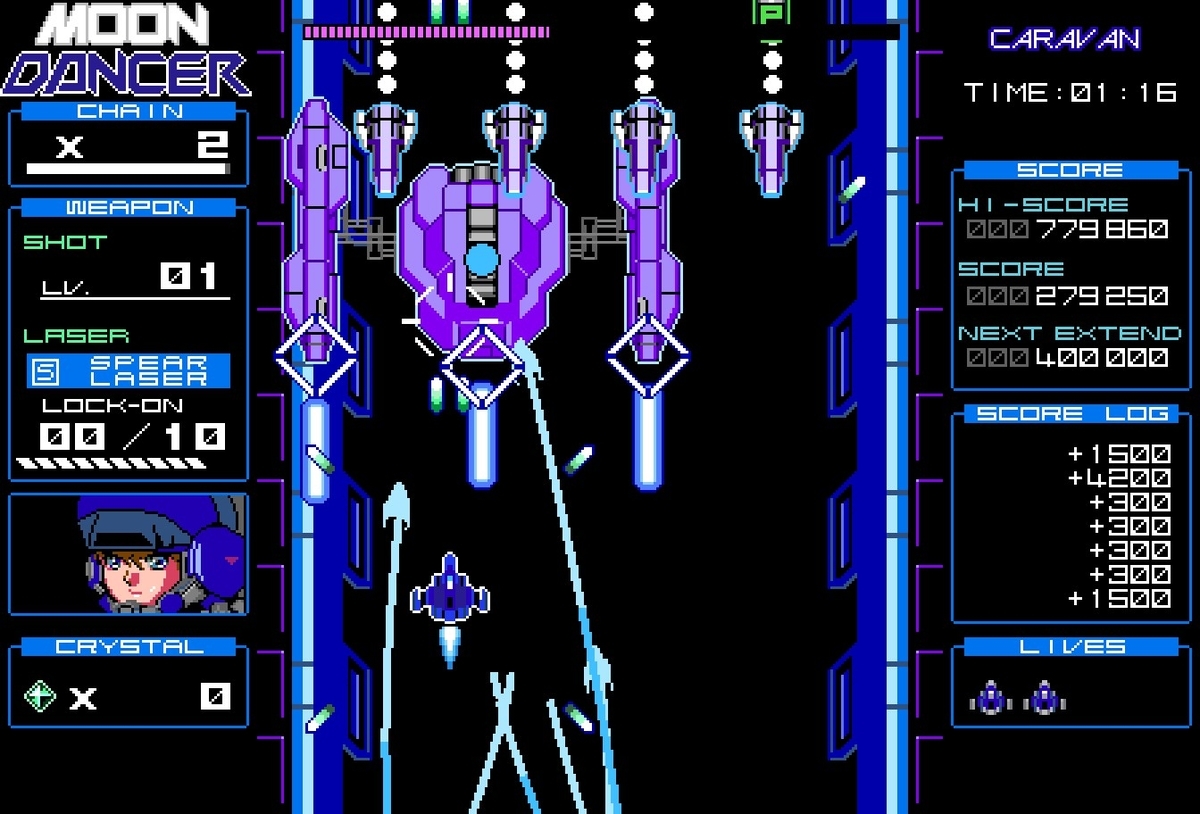 Tips:
Even if you touch the enemy body, you will not be damaged, so it is also one way to shoot a shot on top of the enemy and destroy it quickly.
If you use the Multi laser, you can attack enemies at the bottom of the screen. 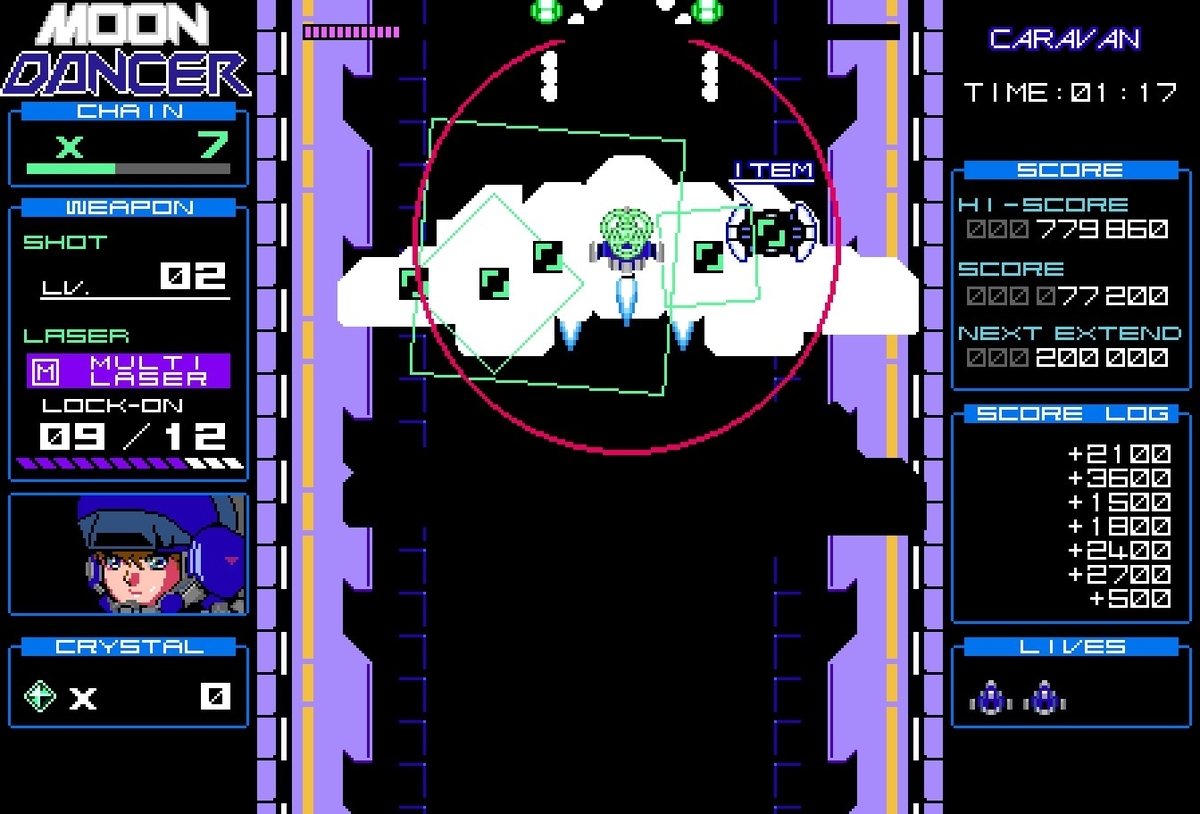 When you destroy an enemy body, the enemy bullets fired by that enemy disappear and spit out crystals. Even if the enemy attacks first, you can avoid being damage if the lock-on laser hits the enemy in time. 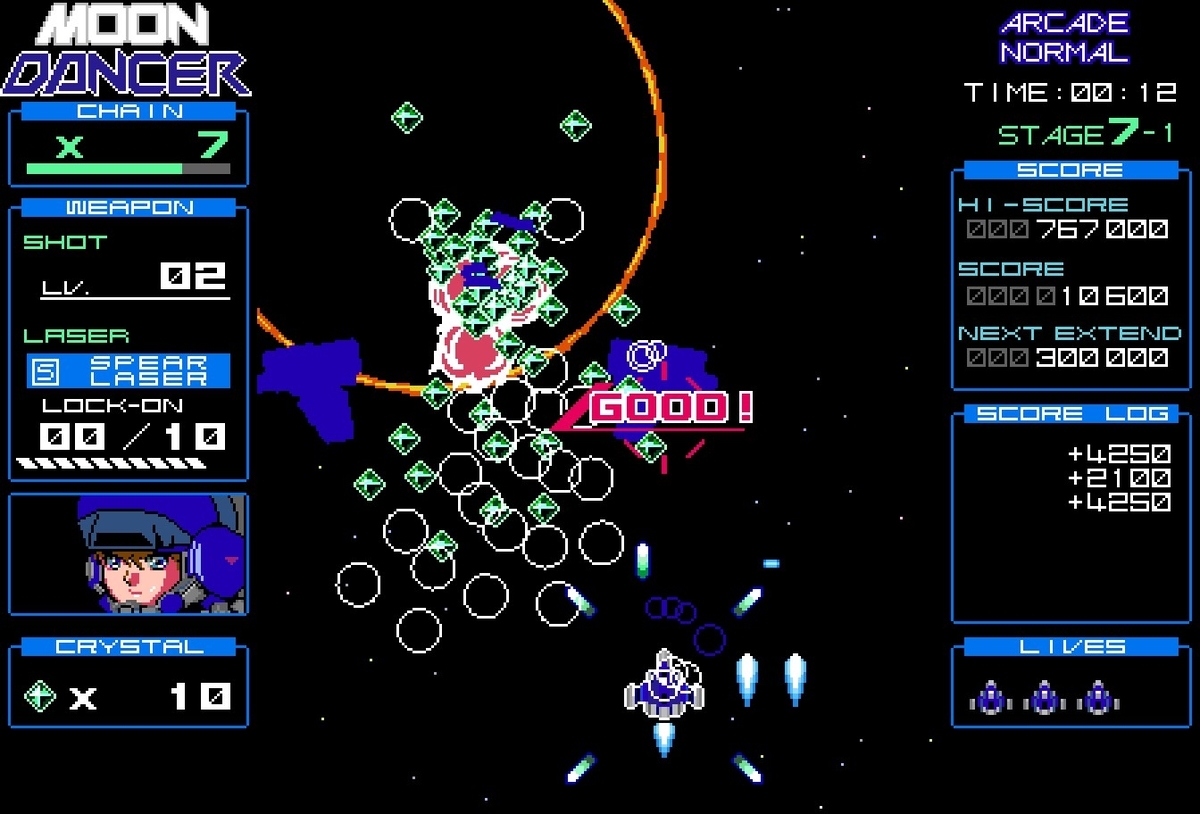 Item placement is fixed. Also, item carriers will appear regularly in boss battles. If you wait, you can get the item you want.

Destroy all enemy formations to add a bonus.

The boss has a time limit. You can get a time bonus if you defeat it quickly. 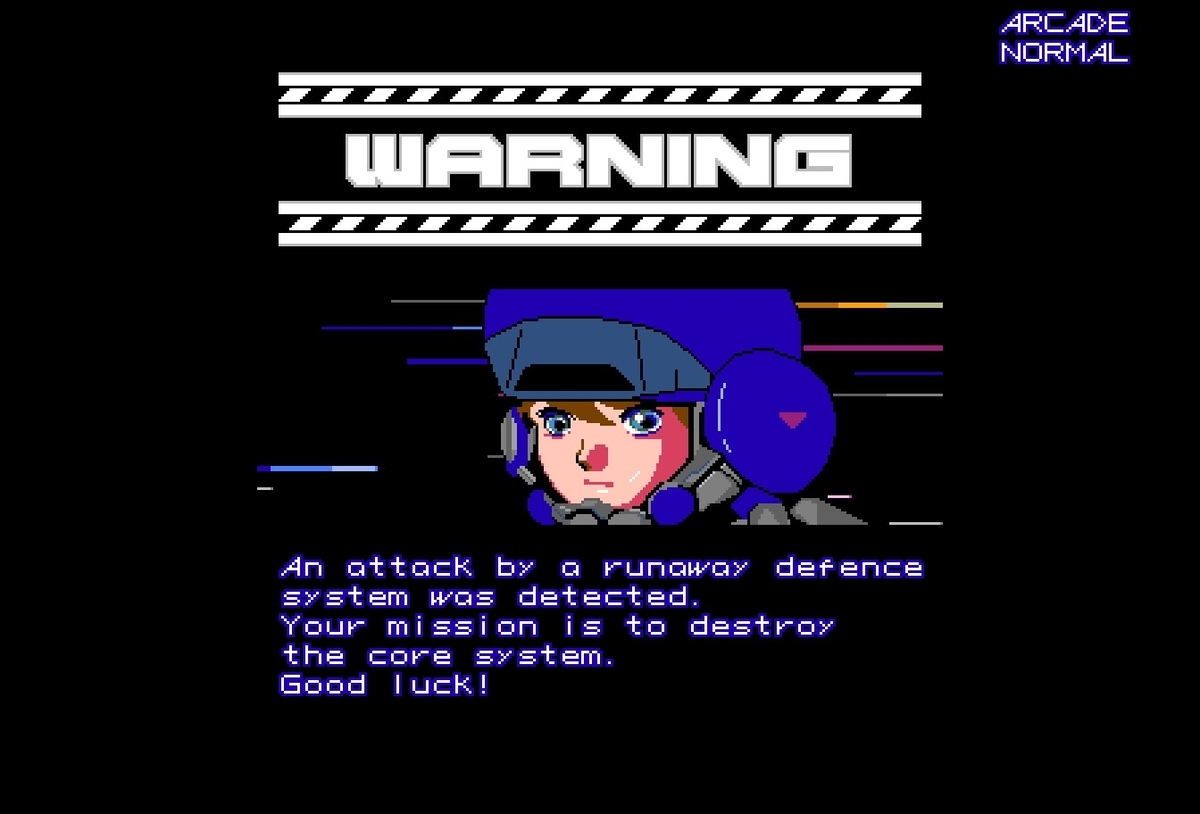 From Terarin:
Moon Dancer is a nostalgic but new and exhilarating Shmups. It also supports online ranking, so you can play many times and compete scores with players from all over the world. Not only Shmups fans but also users who haven't played Shmups very much can enjoy it.

This time I applied the checkpoint system to arcade mode. The lock-on laser in this game is so powerful, so I think it is not good to exhaust the remaining machines and easily clear the game. That's why I applied the checkpoint system. I think the good thing about this system is that you can immediately put into practice what you have learned. In that sense, it's a kind system.

I made it by thinking deeply about how to make interesting Shmups in a period of 6 to 12 months by developing by myself. I've created lock-on Shmups in the past called Moon Striker and Missile Dancer. Moon Dancer is a work that makes use of these experiences.

Thank you for your support. Please enjoy this game.